Tim Duncan and Shaquille O’Neal. Both players were incredibly successful during their time in the league, winning multiple championships and individual awards. However, there are also some significant differences between the two players. Duncan was known for his fundamentally sound play and consistency, while O’Neal was more of a physical force and an electric personality.

Let’s take a closer look at the careers of these two NBA legends. 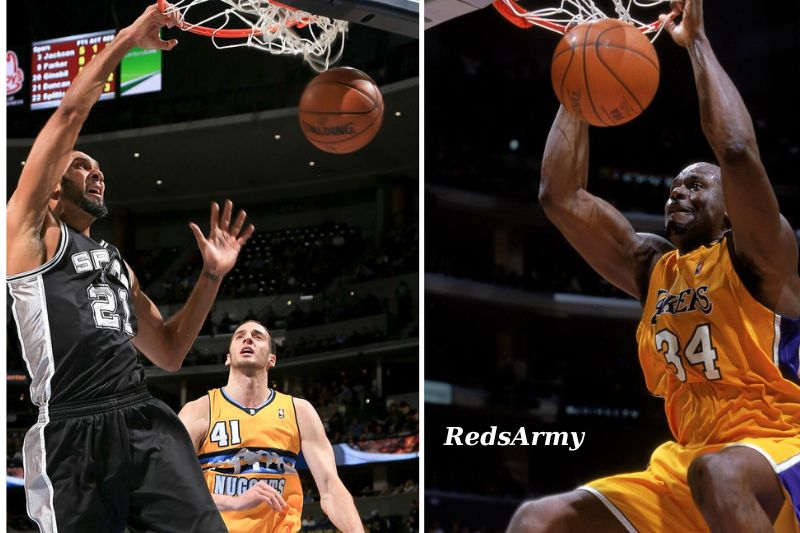 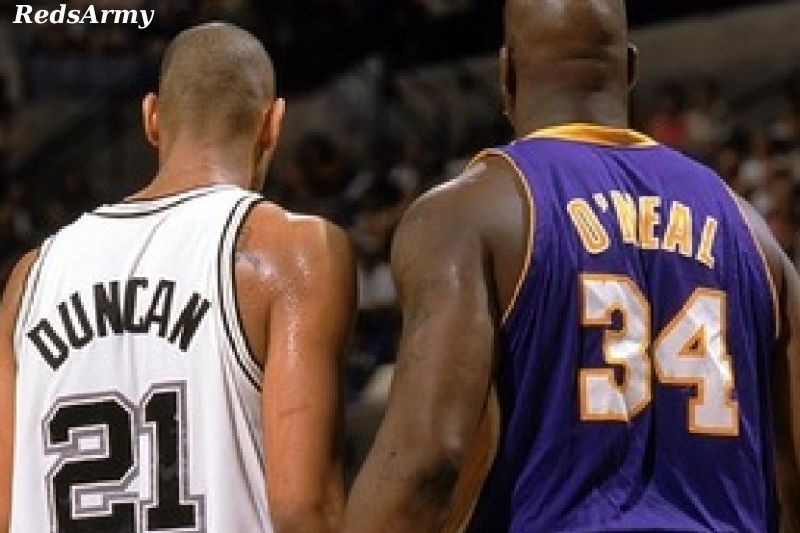 Shaq and Duncan each spent 19 seasons in the league. Both were No. 1 overall choices, and both have a genuine claim to be the best No. 1 overall picks of all time.

While Shaq departed LSU after three seasons at the age of 20, Duncan finished his program as he’d promised his family before declaring for the 1997 NBA Choose, when three clubs tanked in order to win the sweepstakes to draft him.

Both of them were able to almost single-handedly propel their clubs to the playoffs.

Shaq and Penny advanced to the NBA Finals after defeating Michael Jordan’s Bulls, and a shift to the Western Conference with the Lakers saw them threepeat at the start of the 2000s. 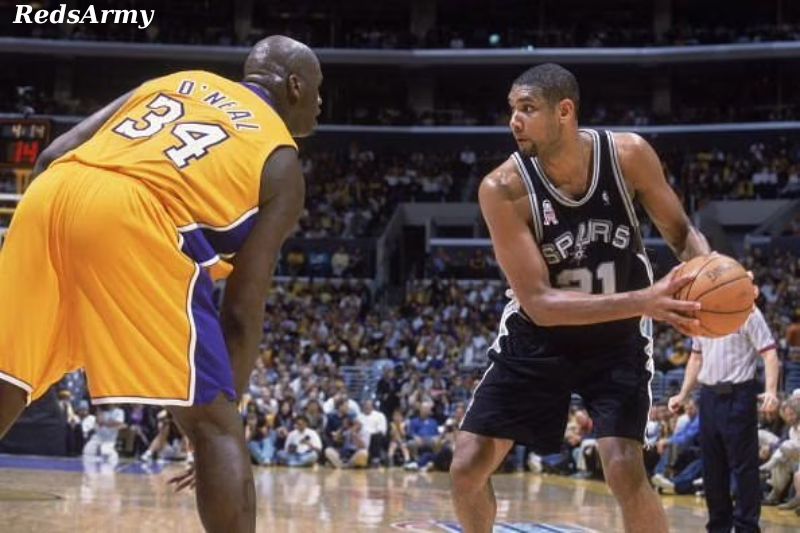 As previously stated, both players played for 19 seasons and were at least serviceable role players till the finish.

While Shaq’s three-peat with the Lakers ranks among the top postseason peak performances by a player, Duncan’s peak of guiding the Spurs to four titles in nine seasons is on a par – every Finals series from 1999 to 2007 included one of these two big men.

But Duncan aged substantially better, remaining an All-NBA level player on both sides of the floor and even making many All-Defensive teams after turning 30.

Shaq was never a completely engaged defender, especially during the regular season, therefore his All-Defensive Teams total falls as a result. He did, however, earn three All-Star Game MVPs. 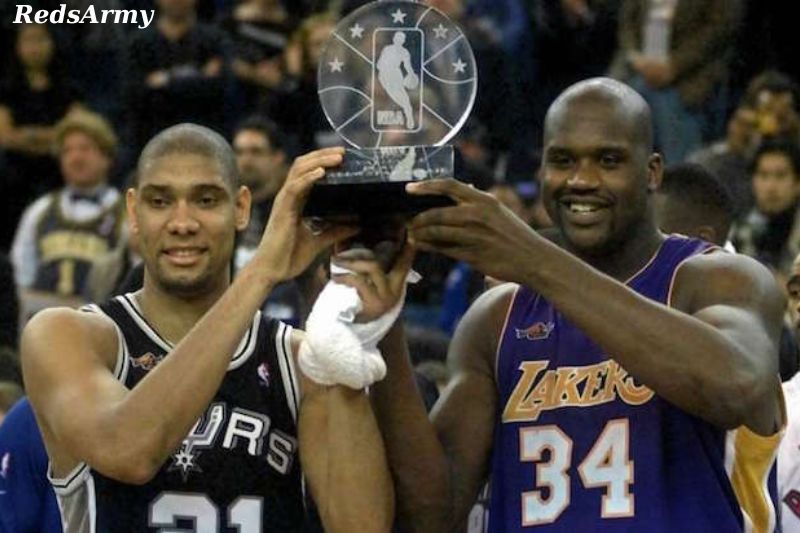 Because their primes coincided with Kobe’s, Shaq was not regarded a genuine MVP candidate after winning it once in the 1999-2000 NBA season.

Shaq played a crowded position at the outset of his career, which meant he missed out on a pair of All-NBA First Team honors to players like David Robinson and Hakeem Olajuwon.

With the information that we’ve supplied, it’s difficult to fault Shaq for finishing a little lower than Duncan, albeit Duncan’s greater durability definitely allowed him to amass more awards. 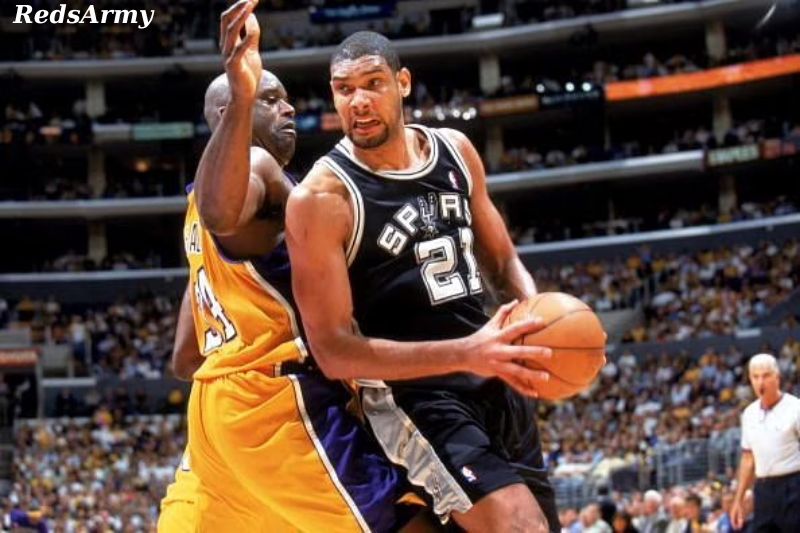 Shaq demonstrates his undeniable supremacy over Duncan here. For the first 14 seasons of his career, his lowest scoring average was 20 points per game in 2005-06.

His rookie statistics rank among Kareem, MJ, Wilt, and Oscar as some of the most dominant numbers ever put up by a first-year player in the NBA.

He even averaged a double-double for his first 13 seasons, falling short by less than one rebound a game in 2005-06 – only Dwight Howard and Wilt Chamberlain have more consecutive seasons averaging a double-double.

Totals for My Career 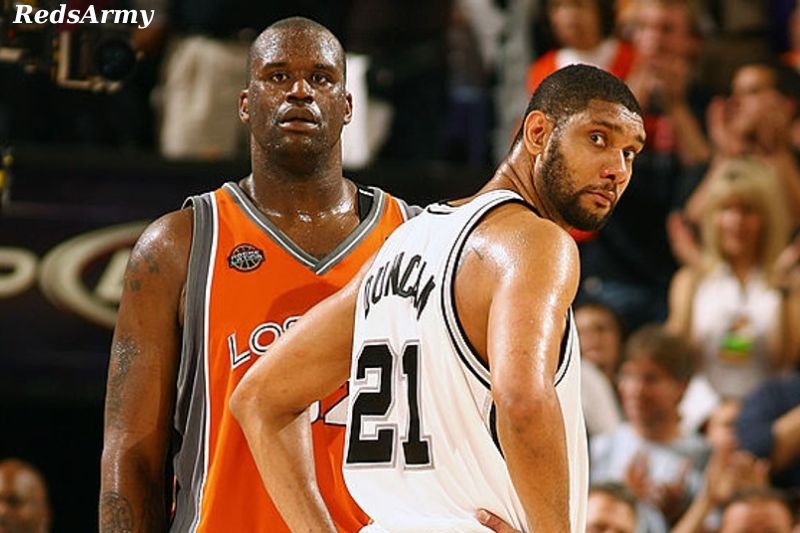 Shaq lost a lot more time due to injuries than Duncan, totaling 185 fewer regular season games while being eligible for the same amount of seasons.

He sparked a major schism inside the Lakers’ locker room in 2002-03 when he elected to ‘heal on company time and return late for the regular season.

Duncan had lost most of his explosiveness by the time he was in his late twenties and early thirties as a result of a meniscus tear that kept him out of the 2000 playoffs.

However, his statistics support the assumption that he matured more gracefully than Shaq. 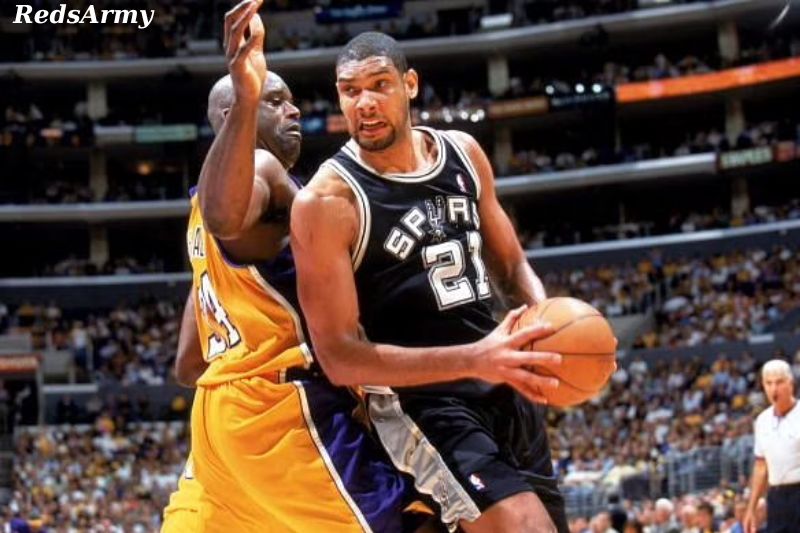 One of Shaq’s detractors over the years has been that his lack of a jump shoot, along with his inevitable athletic decline, drove him out of the game quicker than other great big men like Kareem, David Robinson, and Hakeem.

In his peak, though, he was unstoppable in transition, as a roll man, and when he positioned himself in front of his opponents down in the low post, making his way to the bucket in a clumsy, methodical fashion that earned him the apt moniker of Diesel.

Duncan, on the other hand, was a more skillful player who had to compromise his field goal percentages.

During his time with David Robinson, Duncan would frequently attempt perimeter shots to make room for his Twin Tower counterpart to play within the paint.

Both of them, though, were above-average offensive players until the conclusion of their careers.

1. Who is better, Shaq or Tim Duncan?

2. What did Shaq say about Tim Duncan?

Shaquille O’Neal Says Tim Duncan Was Immune To Trash Talk: “The Spurs Won Because Of Tim Duncan, A Guy I Could Never Break…”

3. Did Shaq only shoot one 3-pointer?

Shaquille O’ Neal scores only one three-pointer in his career. Shaq attempted a total of 22 three-pointers in his 19 years-long professional basketball career but only scored one. In the 1995-96 season, Shaq scored his first and only three-pointer against the Milwaukee Bucks

4. What is Shaq Vs Tim Duncan Head To Head

In short, Tim Duncan is a better player than Shaquille O’Neal. Duncan has proven to be a more consistent player throughout his career, and has had more success in the playoffs. O’Neal has been plagued by injuries and has not been as effective in recent years.