Tim Duncan and Kevin Garnett. Both players have had long and successful careers, but who is the better player? We will take a look at their stats, accomplishments, and impact on the game to try to answer this question. 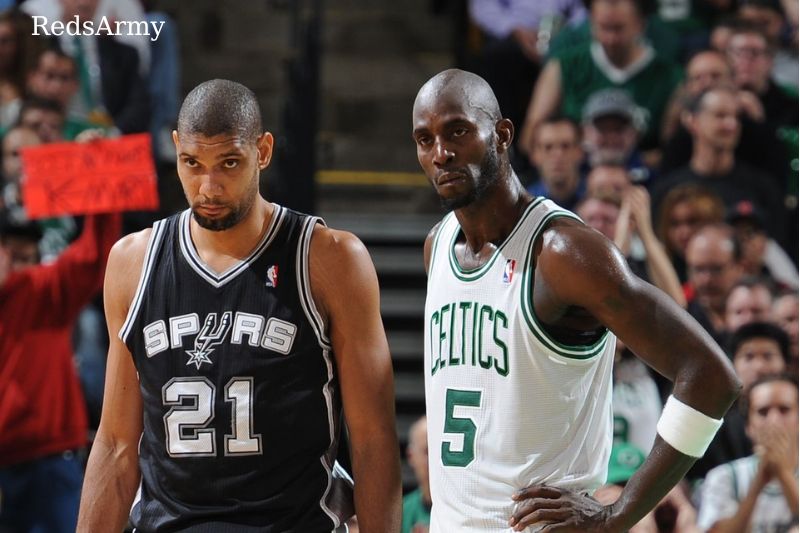 Tim Duncan set a career best in points in a devastating defeat to the Dallas Mavericks in 2005. The Spurs were coming off a tough loss to the Milwaukee Bucks and were hoping to rebound immediately. Duncan was incredible on this night, shooting 19/28 from the field and nailing 15 straight free throws at one point. He was amazing. His team, on the other hand, was not.

Aside from Duncan, the Spurs shot 20-57 from the field that night. Despite their awful shooting, the Spurs were able to force overtime against Dallas. The Spurs seized a two-point lead with seconds remaining in overtime. Steve Nash and the Mavericks would not be denied, and with 0.6 seconds remaining, Nash buried a three-pointer to give Dallas the victory. Duncan famously quipped after the game, “I wish I had missed all of my shots the way this game went.”

Unfortunately, Kevin Garnett’s good night coincided with a defeat to a team headed by Steve Nash. Garnett’s performance mirrored Duncan’s in more ways than one, as he too went 19-28 from the field on the night. Garnett also had 17 rebounds, four assists, and two steals. However, the Phoenix Suns were 26-4 at the time and won 122-115. The Timberwolves, like the Spurs, let him down.

Aside from Garnett, the Wolves shot 28-58, with only Sam Cassell producing 24 points and nine assists on 11-15 shooting. This was Nash and Amare Stoudemire’s night. Amare ended with 34 points and eight rebounds, while Nash had 20 points and 16 assists. Nash went on to win the MVP award that season, as the Suns ended with the best record in the NBA at 62-20. 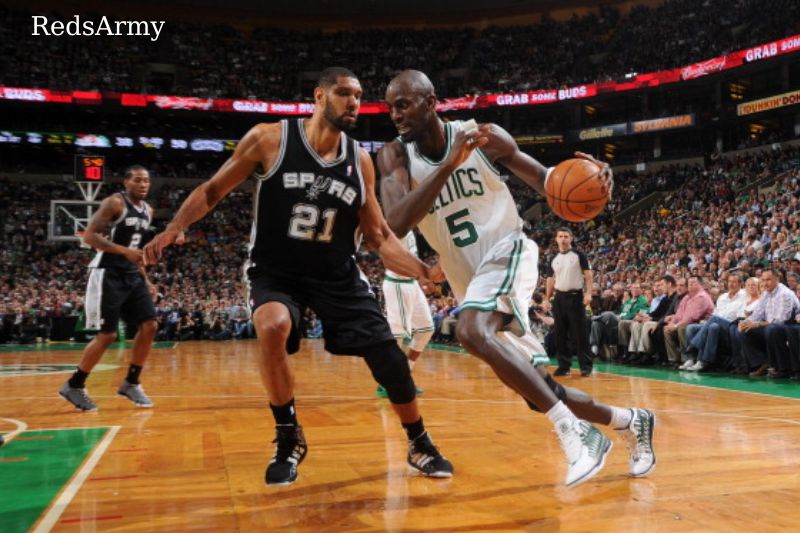 Duncan set a career-best in rebounding against the Atlanta Hawks in a 105-90 victory in 2010. Duncan shot 5-20 from the floor for 21 points and 27 rebounds. Tim Duncan, like he always did, found a way to make influence the game even when he struggled to shoot the ball. Duncan had 25 or more rebounds in a single game three times throughout his playing career, totaling 15,091 in 20 seasons. Not only is he the Spurs franchise leader in this statistic, but he also ranks seventh all-time.

Kevin Garnett set a career-best with 25 rebounds against both the Magic and the Kings. Garnett dominated the Kings on the glass during his career, collecting 24 or more rebounds four times.

READ ALSO  Difference Between Michael Jordan Vs Shaq vs Steph Curry: Who Was Better Player 2022

Garnett grabbed 25 in 2003 while also scoring 33 points and dishing out six assists. Garnet finished his career with 14,662 rebounds, ranking him 10th all-time. 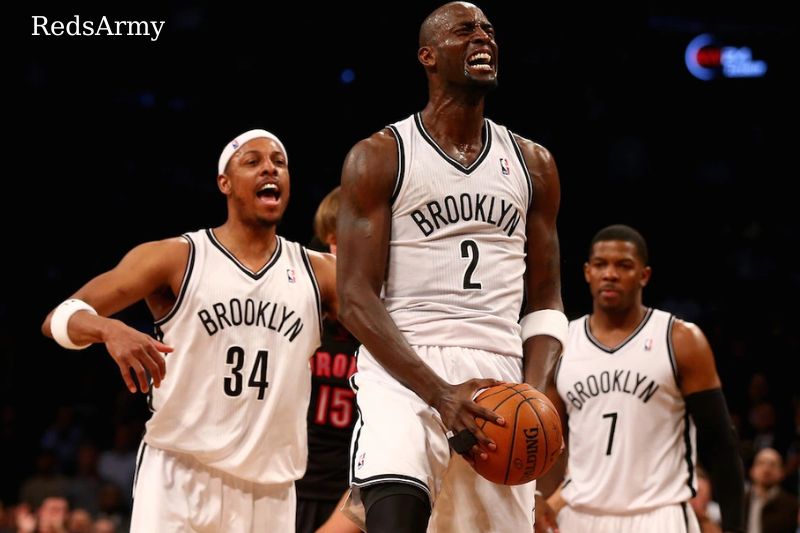 In each of the four games in which these two players set a career best in assists, they also had a triple-double. Tim Duncan had 2,092 assists in his career, ranking him 22nd all-time among power forwards. Garnett, on the other side, has 4,149 assists in his career, trailing just Karl Malone for the most assists by a power player of all time. Duncan was a strong passer for his position and feasted when opponents opted to double-team him in the low post, and he could find his shooters.

Garnett was a formidable playmaker for a guy his stature. He possessed the vision of a point guard, often finding his teammates on their cuts, hitting them right in their hands, and expertly leading. Garnett, like Duncan, flourished when teams opted to double-team him in the post, and he could find his teammates on the cut or on the perimeter. He also ran the court exceptionally effectively, and if he wasn’t finishing the play himself, he was seeking the greatest opportunity for his teammates to do so. 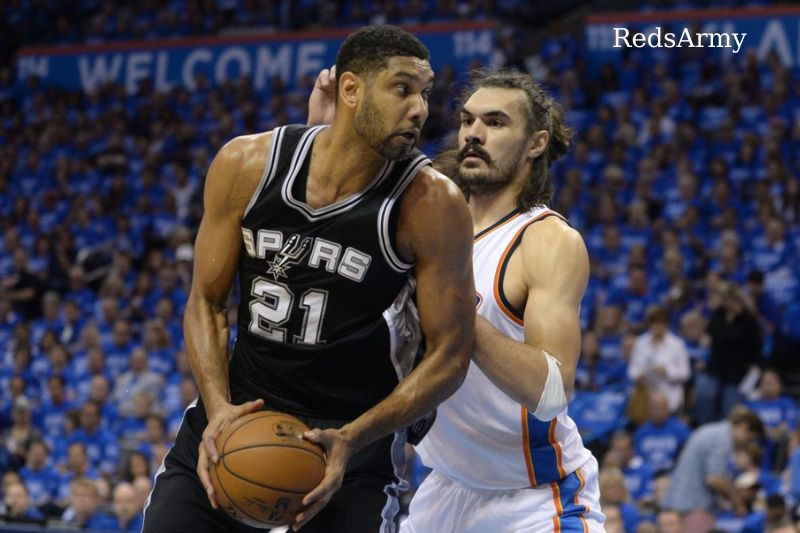 Tim Duncan was a defensive standout. He was a lot superior defender when an opponent had the ball and was attempting to score at the post. He displayed an above-average ability to reject the entry pass in the post, which is how he acquired the majority of his thefts. Duncan had 8 steals, 24 points, and 13 rebounds in a 106-97 win over the Nuggets.

Garnett is unquestionably one of the finest defensive power forwards of all time. His extraordinary anticipation, outstanding vision, and relentless motor that swarmed attacks to death made him so brilliant. Garnett had 5 or more thefts in a game 16 times in his career, including the two instances where he had 7. He averaged 1.4 SPG during his career and had 1,859 steals, ranking fifth all-time among power forwards.

Tim Duncan had 1,650 blocks in his NBA career. He has 7 blocks 11 times in his career and 8 blocks 5 times. He had nine blocks against the 11-33 Memphis Grizzlies. Duncan had 26 points and 13 rebounds in the rout. Duncan ranks fourth all-time in power forward blocks, three slots ahead of Kevin Garnett, who has slightly more than 200 fewer career blocks. Duncan’s spot on the list is notable because he played 329 fewer career games than Garnett.

Garnett was also an excellent shot-blocker. As previously stated, he ranks 7th among power forwards in career blocks. Garnett had 8 blocks in a game on back-to-back nights in 1997, his second year in the NBA. Both of his efforts culminated in triumphs over the Ray Allen-led Bucks and Antoine Walker’s Boston Celtics. Garnett has seven blocks in a game six times in his career and six blocks eight times. 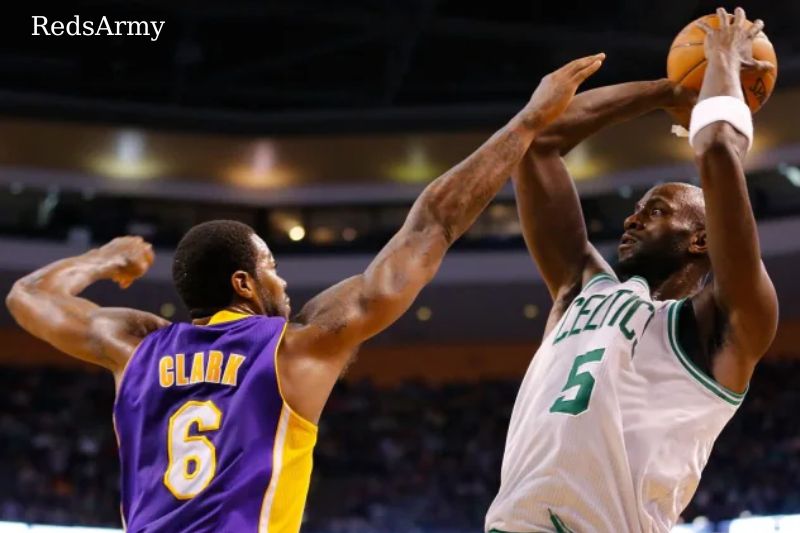 Tim Duncan is not a three-point shooter. His strategy was to control the paint on both ends, with no need to extend him outside of the paint. The periphery was not his territory. Duncan tried 168 3-pointers in his career and made only 30 of them. That’s a stunning 17.9% from beyond the arc.

Meanwhile, Kevin Garnett has a far superior ability to spread the floor. He wasn’t camped out behind the 3-point line, but he could hit them if he wanted to. His shooting was better suited to the mid-range, but he was semi-effective from three. Garnett attempted 632 3-pointers in his career and made 174 of them, for a percentage of 27.5%. 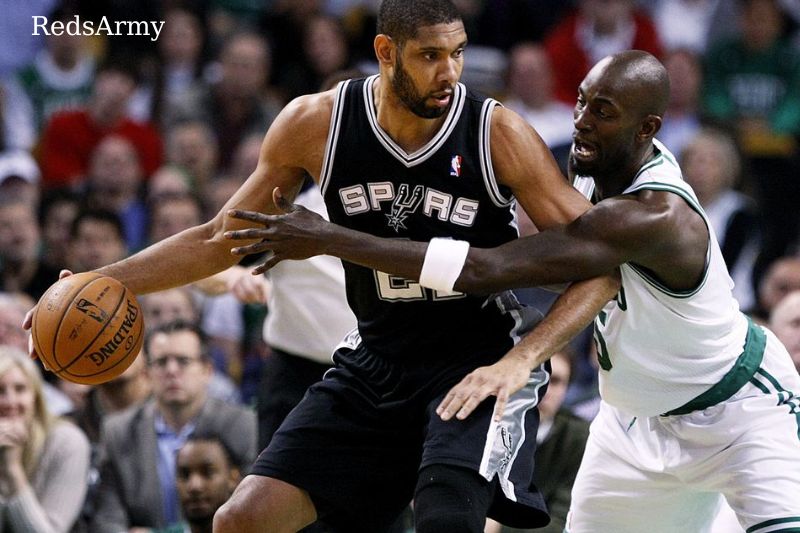 Tim Duncan set a career-best in field goals made during a career-high scoring effort against the Mavericks in 2003. He scored 53 points in the game, but he also scored 19 points on two other occasions. Duncan scored 39 points, grabbed 13 rebounds, and blocked six shots in a victory over the Grizzlies in 199. He would do it again against Orlando in 2003, going 19-34 for 47 points in another triumph.

It should come as no surprise that Kevin Garnett’s career-high in assists coincides with his career-high in points. Garnett scored 47 points on this night in 2005, shooting 19-28 from the field. He also had 17 rebounds, 4 assists, and 2 steals. He shot 67.9% from the field and 9-11 from the free-throw line. The Suns went on to win the game 122-115 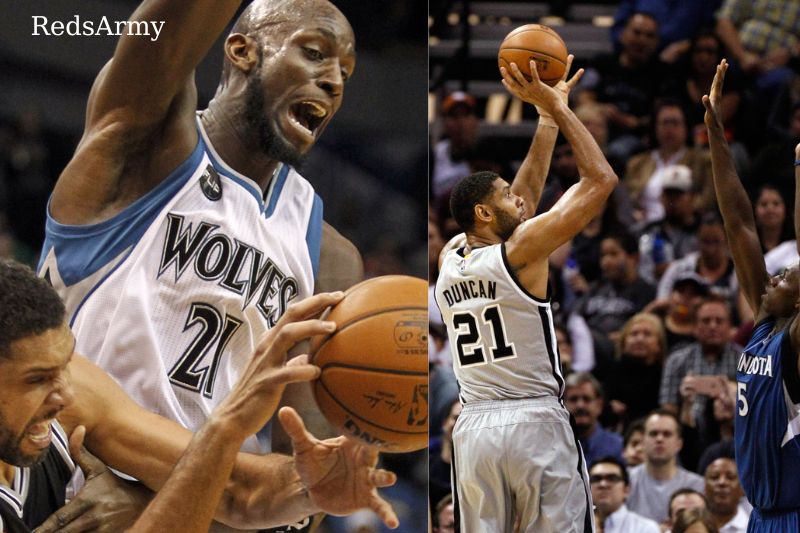 Tim Duncan and Kevin Garnett were both adept at getting to the free-throw line, especially later in their careers. Duncan had a career-high at the charity stripe against the Jazz in 2002. Duncan shot 17-17 from the line and finished with 35 points, 10 rebounds, and 5 blocks in a 4-point win over the Jazz. Duncan shot 69.6% from the foul line in his career.

READ ALSO  Who is the oldest NBA player 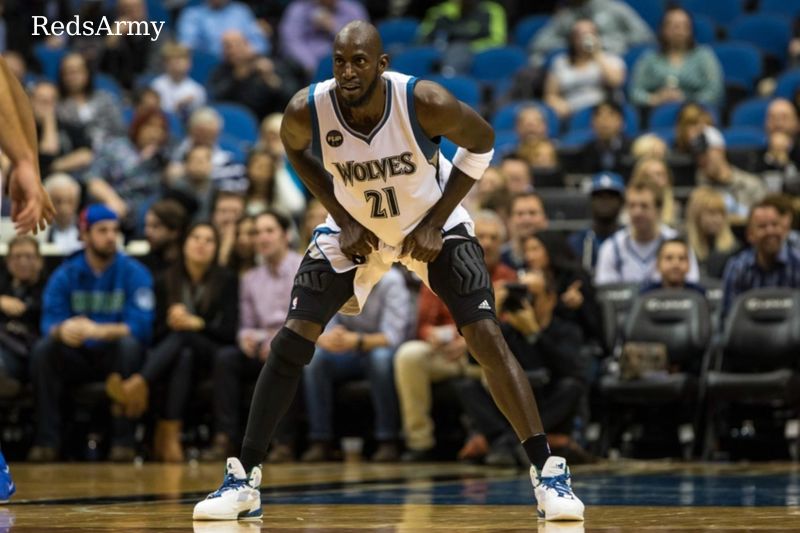 Tim Duncan was more prone to turnovers than most people realize. With 3,381 turnovers, he ranks 16th all-time. Duncan may have cost his squad the game on this particular night. Despite his 35 points, 17 rebounds, and 5 blocks, Duncan had 10 turnovers as the Warriors won 90-83. We’ll simply chalk it up to Duncan’s rookie year growing pains.

Garnett was a little less of a turnover machine than Duncan. In comparison, Garnett had nearly 200 fewer turnovers than Duncan in over 300 more games played. When you do the arithmetic, that’s a significant difference. However, against the formidable Pistons defense in 2000, Garnett had his worst turnover night of his career. Garnett led the way with 22 points, 14 rebounds, and 8 assists in a 110-105 victory. However, Garnett’s mistakes clearly led his team, with Joe Smith’s three giveaways being the next highest by a player.

Who was better, Tim Duncan or Kevin Garnett?

Tim Duncan and Kevin Garnett embodied what it means to be a true professional and an ultimate NBA royalty as their careers intertwined with each other throughout the almost two decades they both spent in the NBA. Garnett had tremendous respect for Duncan, which he outlined in his new book.

How many games did Kevin Garnett and Tim Duncan play against each other?

To know the detail, you can click this link to learn more: https://stathead.com/tiny/wMSX1

How many rings does Kevin garnett have?

Both Tim Duncan and Kevin Garnett are considered to be among the best power forwards of all time. They both have NBA championships, All-Star appearances, and individual accolades. While Garnett may have the edge in some categories, Duncan is widely considered to be the better overall player.

Thank you for taking the time to read