There is no denying that LeBron vs Durant are two of the best basketball players in the world. They both have won MVPs, and Championships and have been All-Stars numerous times. However, when it comes to who is the better player, there is a lot of debate.

So, who is the better player?

Kevin Durant vs. LeBron James in the regular season 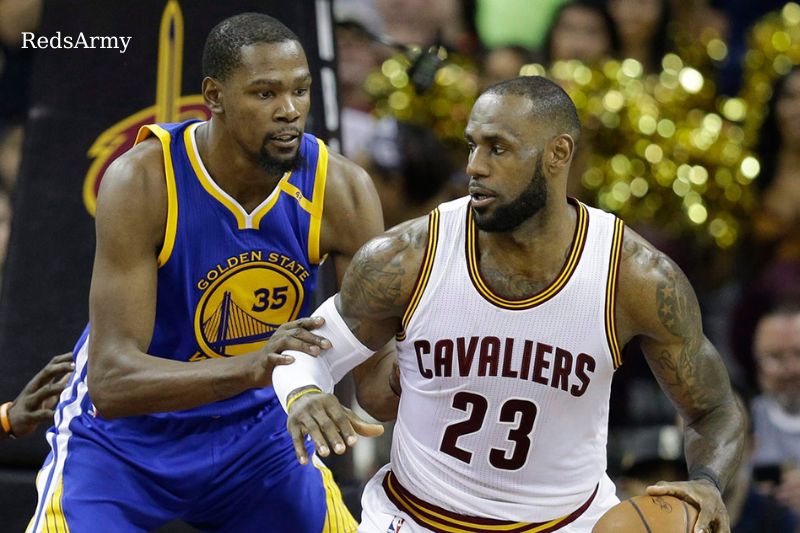 LeBron and Durant have faced each other 21 times in their careers, with LeBron holding a significant lead. When Durant originally joined the Supersonics/Thunder, LeBron defeated him six times. When LeBron was with the Miami Heat, the Big 3 of LeBron, Dwyane Wade, and Chris Bosh not only dominated Durant, Russell Westbrook, and James Harden in the regular season but also in the 2012 NBA Finals (more on that later).

While the stats on both sides are outstanding, you have to marvel at how LeBron-led teams outperformed Durant throughout the regular season. LeBron defeated Durant twice in the regular season during Durant’s final year with the Thunder. It wasn’t until Durant joined the Warriors that he won three of his six games.

Due to injuries and COVID, the two have not faced each other in the regular season since Christmas 2018. Both players represent new squads since the last time they danced, so maybe they can stay fit. 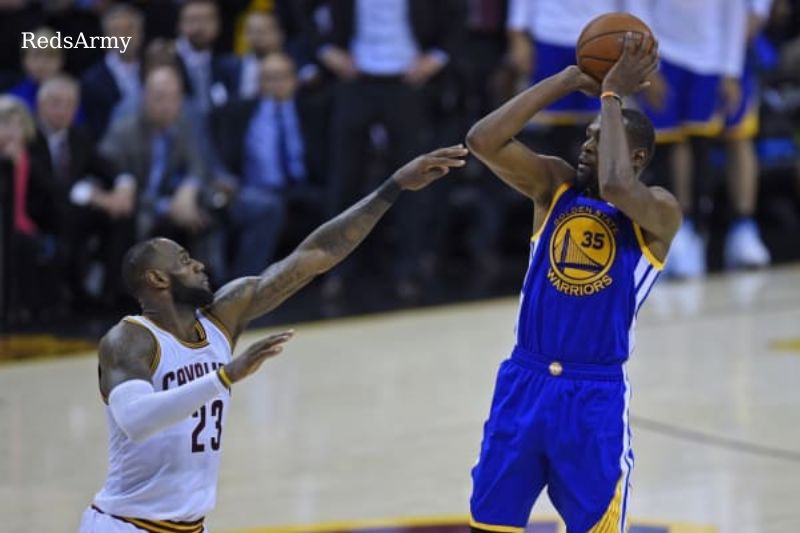 Let’s get this out of the way quickly. Durant and LeBron have only met in the playoffs and the NBA Finals. Durant has played for both the Thunder and the Warriors, both Western Conference clubs. LeBron has played with the Cavaliers and the Heat, both Eastern Conference clubs. When LeBron joined the Lakers, Durant departed to join the Nets. Therefore the two teams flipped.

Anyway, the first meeting between the two occurred in the 2012 NBA Finals. The Thunder won the opening game, but the Heat won four straight to claim the championship. The two then played again in the 2017 and 2018 NBA Finals, with LeBron securing only one total win over KD, which includes a Warriors sweep in 2018.

Again, the metrics are pretty similar, but Durant’s free-throw shooting stands out. Durant finished 15-16 in the Warriors’ lone loss in 2017 but was pretty consistent across the board. Is a 6% true shooting percentage enough to argue Durant is a better playoff opponent than LeBron? No, especially considering the quality that was surrounding him. 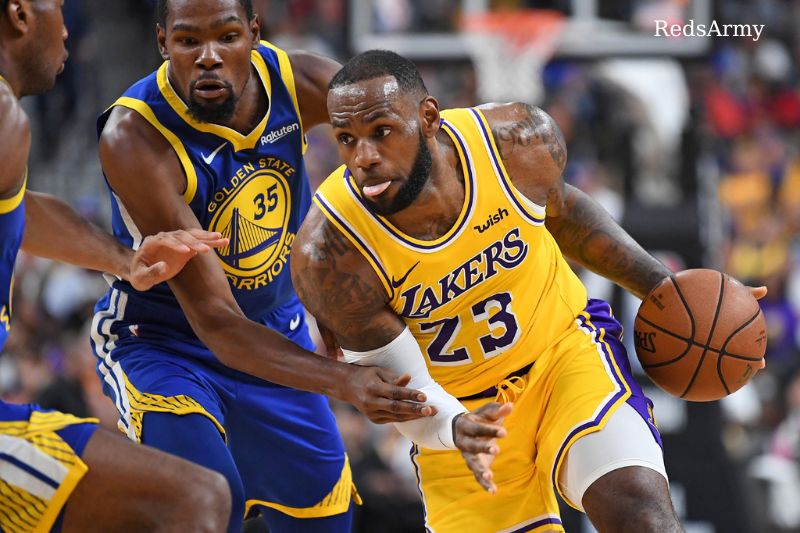 When you mix the regular season and playoff encounters, as well as the numbers, you get a pretty near reproduction of two very good players. From points to rebounds to shooting %, both LeBron and Durant bring their A-game every time. When you look at the stars up close, you can tell they aren’t rivals.

According to his statistics, LeBron is the best overall player. His rebounds and assists are both greater than Durant’s, with his assists total more than double KD’s. The shooting percentages are close, but the real shooting percentages are closer when the regular season is considered. Even the overall head-to-head contest is tight. When you think about it, five games is equivalent to a playoff series.

That playoff series might go to the NBA Finals. If the Nets sweep, Durant would still be on the lower end of the overall matchup, but his postseason record would be 13-5. We’re getting ahead of ourselves because the two clubs will almost certainly play each other at least twice during the regular season. Hopefully, that matchup will take place on Christmas.

Kevin Durant vs. LeBron James in the NBA Finals 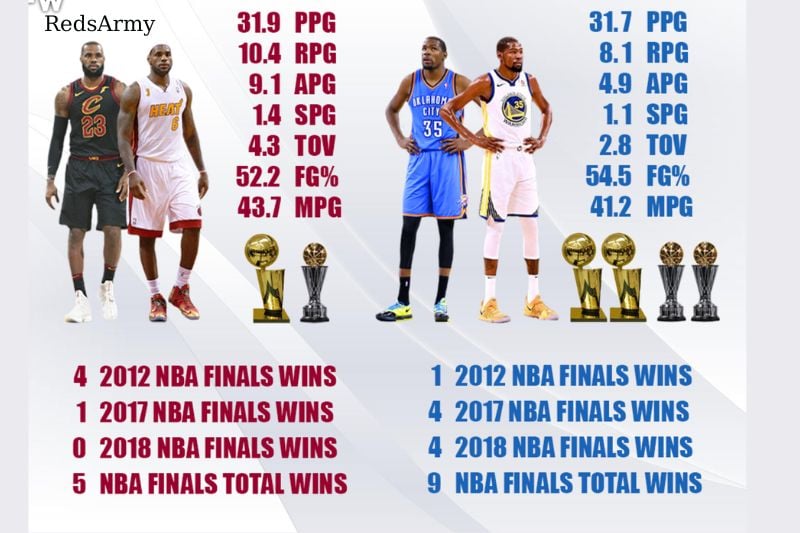 Durant leads the series 2-1. KD won two NBA Finals series as a member of the Golden State Warriors, but James only won one series over Durant in the 2012 NBA Finals between the Miami Heat and the Oklahoma City Thunder.

Durant and James met 14 times in the NBA Finals, with KD winning nine times. The Warriors, led by KD, are 8-1 versus LeBron.

In terms of scoring averages, the NBA Finals are virtually identical to the regular season. However, LeBron James is averaging a near triple-double, while Kevin Durant is shooting the ball more effectively.

James’ finest performance in their NBA Finals clash was Game 1 in 2018, when he ended with 51 points, eight rebounds, and eight assists. It was overshadowed by J.R. Smith’s all-time gaffe at the end of regulation.

Meanwhile, Kevin Durant’s finest game occurred in the same NBA Finals in 2018, but in Game 3. Durant finished with 43 points, 13 rebounds, and seven assists, including the game-winning three-point jumper with less than a minute remaining. 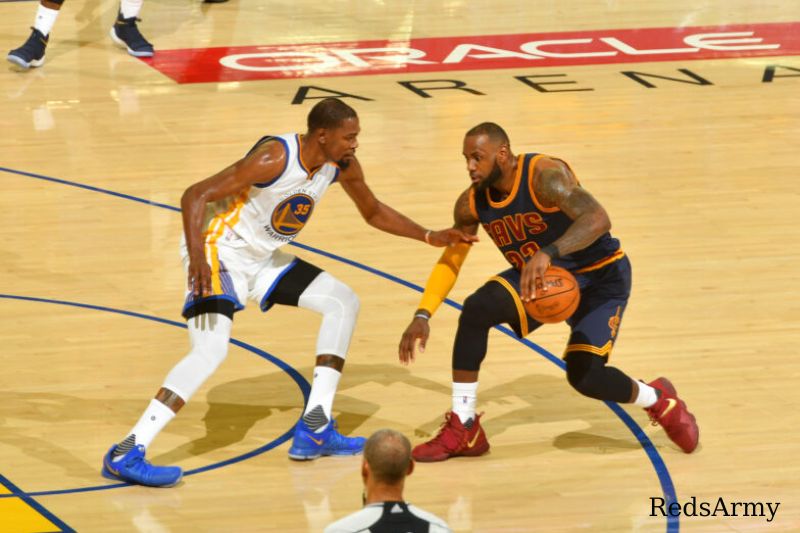 Kevin Durant should improve on this. Throughout his career, he has struggled with ball-handling, particularly holding the ball out on the perimeter. His dribbling, on the other hand, is rather decent for his height.

READ ALSO  How To Clean Basketball Shoes: Tips To Care For Your Shoes 2022

However, Durant’s career turnover average is lower than LeBron’s, which is unexpected given that most fans perceive LeBron to be a superior ball-handler. However, as the primary facilitator for his team, LeBron handles and distributes the ball far more than Durant.

Driving to the Hoop 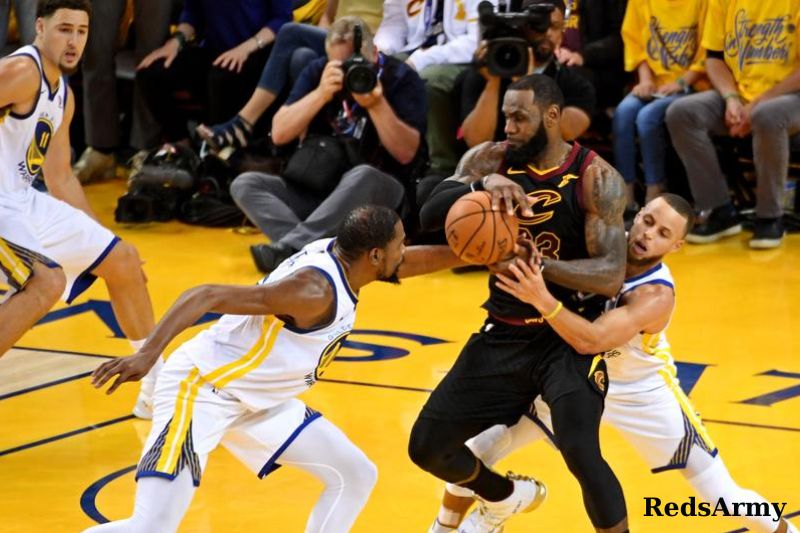 Both athletes excel in this area in quite different ways. LeBron James is maybe the most ferocious and angry basket driver of all time. He uses his bulk and power to pound through opposing defenders and slams dunks.

Durant has more elegance, using his length and quickness to get between opponents to create spectacular plays. Despite the fact that he has demonstrated considerable power.

Finally, I have to give it to LeBron. When he drives to the hoop, he just can’t be stopped. Durant is a decent driver but not as good as LeBron. 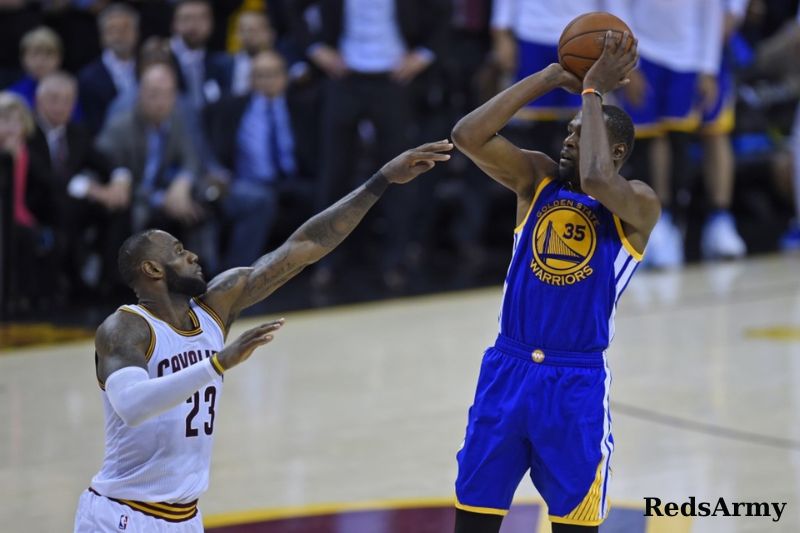 These two are once again quite close, this time in rebounding.

Kevin Durant has averaged 6.3 rebounds per game in his career, which is very impressive for a perimeter player. Meanwhile, LeBron has averaged 7.1 per game, only one rebound more than KD.

However, James has 20 pounds on Durant, which makes a tremendous difference in this area. That extra weight protects him from getting pushed around by bigger men in the post.

Once again, King James is given the nod. 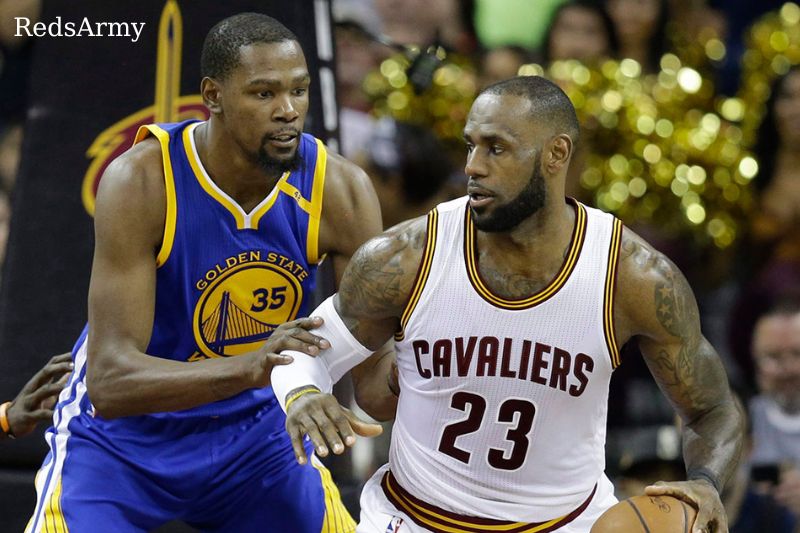 Neither of these guys has been a great defender in the NBA. Both have been high-volume scorers who have been only somewhat effective on defense.

However, LeBron has proven on the occasion that he has the ability to be an excellent NBA defender. His strength, stature, and lateral speed are practically unrivaled in the NBA.

Meanwhile, Durant is still trying to find his defensive game. He’s come a long way since his debut in the league, and he’s shown a willingness to use his large size to block and alter shots. He does, however, suffer from time to time.

In terms of statistics, LeBron has averaged 0.5 more thefts per game, while Durant has averaged 0.1 blocks per game. Bron-Bron gets the nod here since he is a superior one-on-one defender. 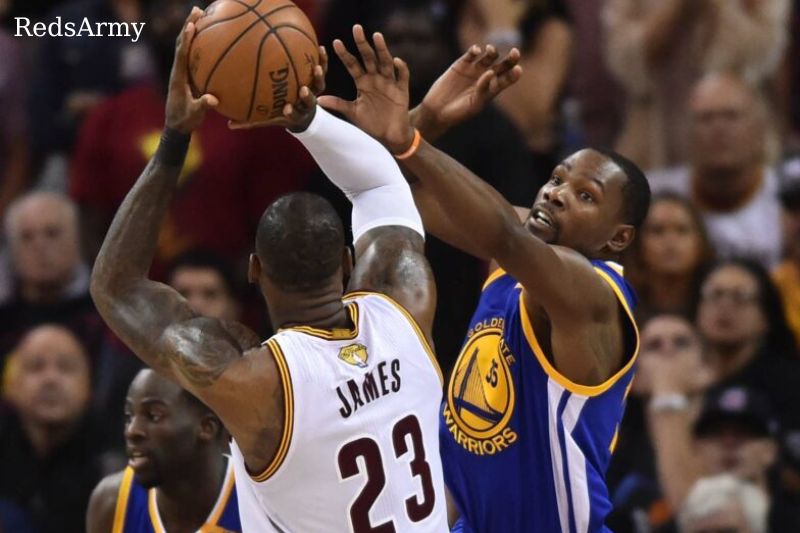 This is arguably the most unbalanced section in the slideshow.

The free throw percentage is the most skewed of the numbers. Durant has a career average of nearly 14 percentage points greater than LeBron. 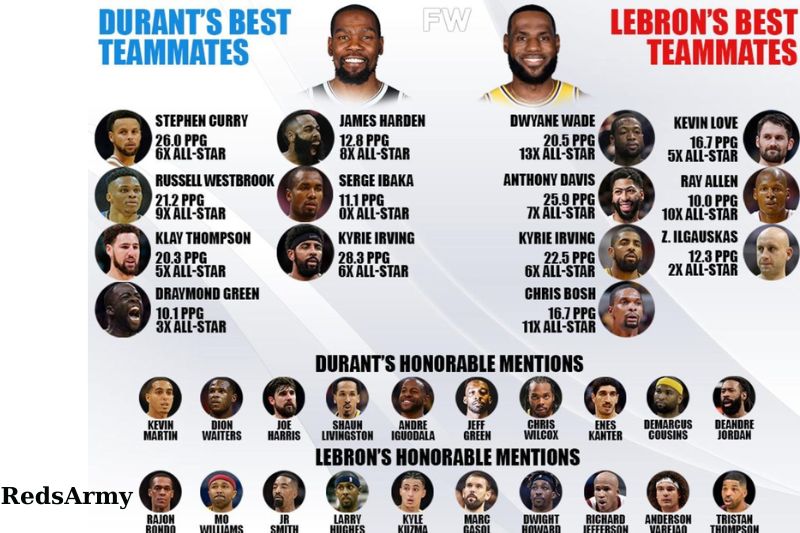 Much has been said about LeBron James’ personality. Many believe he was or is a poor teammate, especially after leaving Cleveland for the richer pastures of Miami.

However, I do not consider James to be a horrible teammate. Granted, he has made mistakes, but he has always seemed to get along well with teammates. I have no inside information about him, so I must take what I observe at face value.

Durant has never been accused of being a lousy teammate. He appears to care deeply about his team and really enjoys their success on the court as much as his own.

Many people made a big deal out of the Westbrook-Durant “drama,” but it was overstated. They appear to be pals who are just learning how to play the game together (much like another duo in Miami). I, like James, have no inside information here, so I must take what I see at face value.

This one goes to Durant since he looks to have more fun with his teammates. 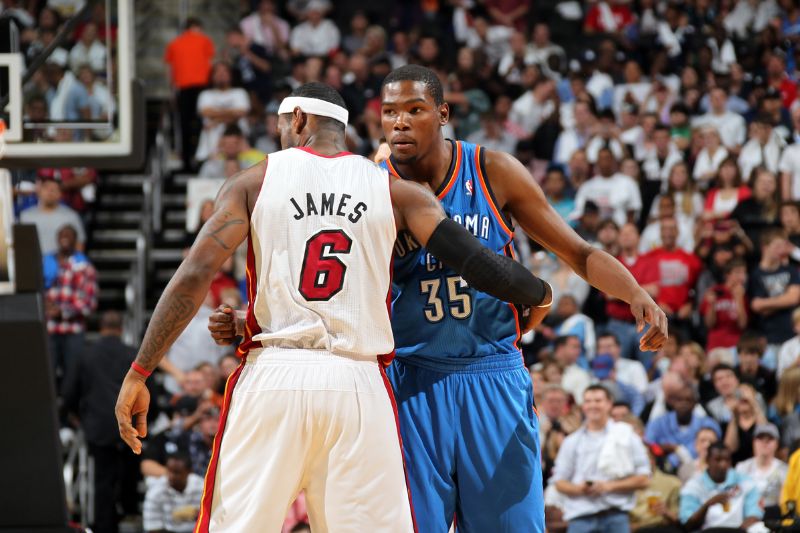 Here we have possibly the most contentious aspect in assessing how good a player is. Do certain athletes have a clutch factor, or clutch gene, as ESPN’s Skip Bayless refers to it? Are there any males that rise to the occasion in crucial moments?

It appears that there are, and that is all we need to warrant talking about it.

I’m not one to blame James for not winning a championship. However, he bears most of the responsibility. He has come up big in postseason games but not big enough to win. That is a difficulty for the most gifted player in the game.

Durant appears to be developing a reputation for hitting the big shot at the perfect time. Last season, he hit a game-winning jumper at the buzzer against the Knicks, and in the playoffs, he came up huge in situations where the Thunder needed to finish an opponent off (41 points vs. Denver, 39 points vs. Memphis). It does hurt that he couldn’t do more to aid the Thunder against the Mavericks, even if that club went on to win the title.

Finally, I must present this to Durant. I’ll never forget James giving up against the Celtics in his final game with Cleveland.

You can read more other comparisons between Lebron James vs others

1. What is Kevin Durant’s record against LeBron James?

Kevin Durant has a 6-15 record versus LeBron James in his career.

2. How many times has LeBron beat Kevin Durant?

Durant and James played 14 times in the NBA Finals, with KD winning nine times. The Warriors, with KD, are 8-1 against LeBron

5. Is Kevin Durant a better player than LeBron?

However, in the NBA this season, LeBron has averaged more points than KD in the 4th quarter. Moreover, LeBron also averages more assists and rebounds than Durant this season. So in reality, it is a tough call to make with regards to who the greater player is.

In short, Kevin Durant and Lebron James are two of the best basketball players in the world. They are both incredibly talented and have a lot of experience playing the game. However, Durant is the better player overall. He is a better scorer, shooter, and defender. He also has a better understanding of the game and how to play it.