In this blog, we will compare the two greatest basketball players of all time: Kareem Abdul-Jabbar and Michael Jordan. Both men were phenomenal athletes who dominated the game during their respective eras. Abdul-Jabbar was a master of the skyhook, while Jordan was a supremely athletic dunker. Both men won multiple championships and MVP awards.

But who is the better player? 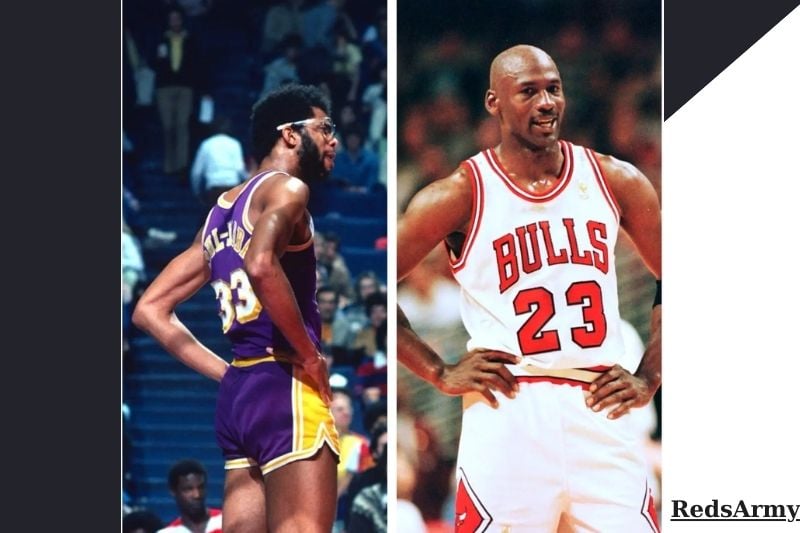 Michael Jordan is largely considered the best NBA scorer of all time, with an all-time average of 30.1 points per game. Jordan’s ability to score near the rim, manufacture his own shot from mid-range, and earn points when it counts makes it difficult to argue that he is not the greatest scorer of all time. Kareem leads all-time in total points scored and owns the most unstoppable shot in NBA history with the Sky Hook. Both players are undoubtedly the finest scorers in history, but does Jordan have an advantage in this category?

The answer is yes. Kareem’s overall points record attests to his durability and ability to be a great player owing to his Sky Hook. Kareem won two scoring titles, while Jordan won ten. Jordan’s ability to score in a period when hand-checking and aggressive defense were permitted is exceptional, and winning a decade’s worth of scoring titles gives him the advantage. 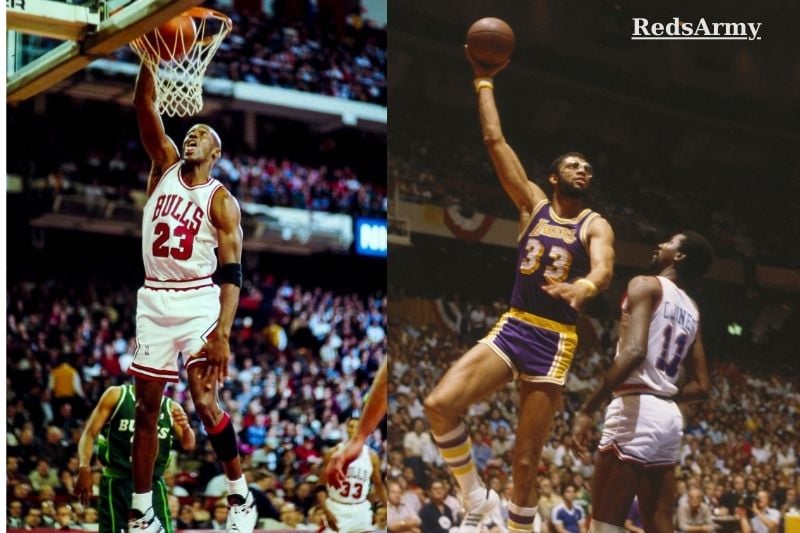 Jordan is a superior athlete in terms of speed, vertical, quickness, and everything else that comes with being athletic. Jordan may be the most stunning physical specimen who made the game so attractive to watch because of his jumping and hang time in the air. Jordan was 6’6″ and weighed 198 pounds during his playing days, allowing him to burst off his feet for dunks and great finishes around the basket.

Kareem Abdul-Jabbar is athletic because of his stature, and he has used his huge physique and height to become one of the most unstoppable players in history. Kareem stood 7’2″ tall and weighed 225 pounds, indicating that he was a rock on the inside. Of course, being so big meant he required a point guard to get him the ball, which Jordan never had to worry about. As a result, Jordan has another win as a greater athlete, and there is no doubt about that. 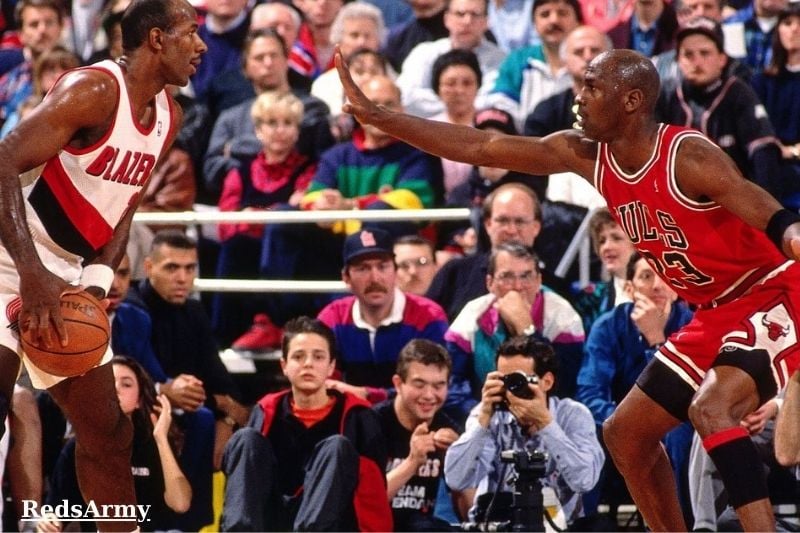 This one, like scoring, is incredibly close since both players are among the finest two-way talents we’ve ever seen. Kareem shut down opponents in the paint, while Jordan did the same on the perimeter. The difference here is because Jordan won Defensive Player of the Year and was named to 9 All-Defensive First Teams, giving him the advantage.

Michael Jordan was named to nine All-Defensive teams, nine of which were All-Defensive First Teams. Jordan was named Defensive Player of the Year three times and led the league in steals three times (in the same season, he led the league in scoring at 35.0 PPG). Jordan’s ability to lock down opposition players was a huge reason for his domination, and the fact that he accomplished it on both sides of the floor at the greatest level was almost superhuman.

Kareem was named to 15 All-Defensive Teams, including 5 All-NBA First Team selections. Kareem also topped the league in rebounding and blocks four times. Kareem’s edge in overall All-Defensive Teams is a tribute to his extraordinary durability and ability to hold down the paint for a decade and a half. Finally, Jordan demonstrated greater defensive domination by winning the Defensive Player of the Year Award as a guard and making more All-NBA Defensive First Teams. 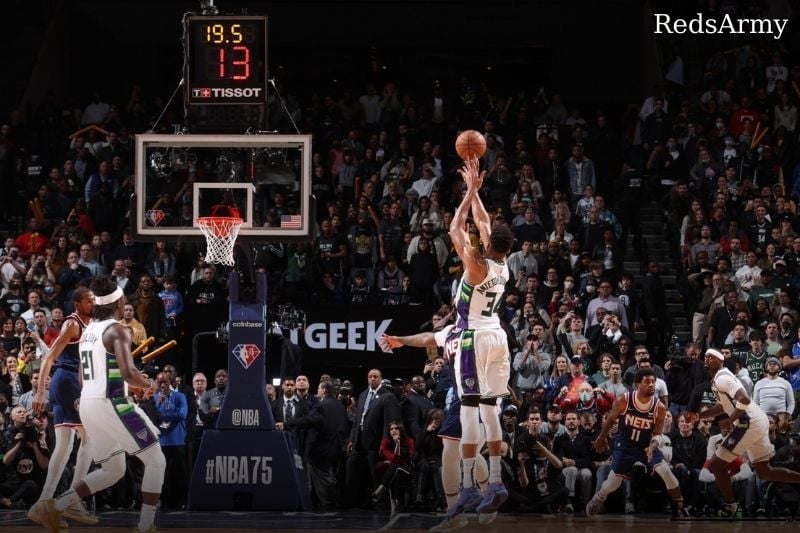 This one is a little harsh, considering Michael Jordan is regarded as one of the most clutch performers in sports history. Even if he didn’t make every huge shot, he had the deadly will and confidence that no one else on the court should try that shot. Jordan’s trust in himself and his abilities provided his team the best chance to win games, and it was also the reason Jordan was a clutch killer.

Jordan also came through in the clutch several times, including game-winning baskets in the playoffs. Jordan’s track record of taking and making the biggest shots gives him the advantage over Kareem, despite the latter’s extraordinary ability to come through for his team. Kareem is one of the finest clutch players in history, but Jordan will always be remembered for it. 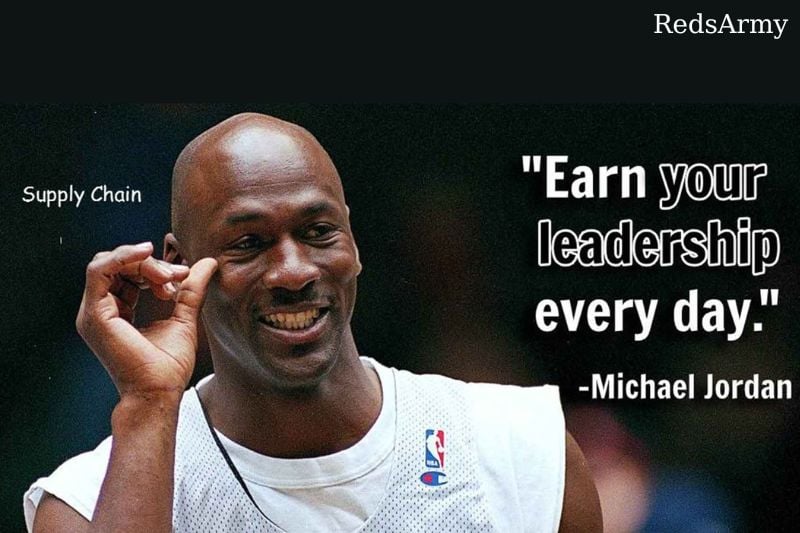 When identifying the greatest player of all time, leadership is critical. While Jordan and Kareem were the NBA’s faces for a long period, their leadership must be demonstrated by their abilities to lead their colleagues on and off the court. So, who is the superior leader so far?

Jordan was the architect of six NBA titles with the Chicago Bulls, as evidenced by his six Finals MVPs. Jordan dominated the Bulls no matter what. He was named Defensive Player of the Year, won 10 scoring titles, and led the club to two three-peats. Jordan was the greatest leader because he set an example for every player to be the best, and he was a hungry winner, even though some of his teammates didn’t like him.

READ ALSO  Who has the most buzzer beaters in NBA history

Kareem has shown that he could be a very good leader and a winner at all phases of his career, but Jordan’s competitiveness and desire for perfection made him a more powerful leader.

The impact on the game of basketball can be seen on both ends of the court and can also be studied by what it led to. Jordan’s effect on the floor extended beyond basketball because he was the most unstoppable offensive force in history. Jordan could get the ball whenever he wanted and did it frequently to boost his team’s outcomes. MJ could not be planned for or stopped because he is the best scorer in history, with the highest PPG average.

Kareem Abdul-Jabbar had the advantage of longevity, and the way he cared for his body as a center is absolutely famous. His ability on both sides of the court was evident, as he won everything there was to win. The main difference is that Kareem couldn’t control the game as much since he required a point guard to bring the ball to him, and he wasn’t always the greatest player on his team. Jordan was and always will be the best player in the NBA for as long as he played, and his effect was larger. 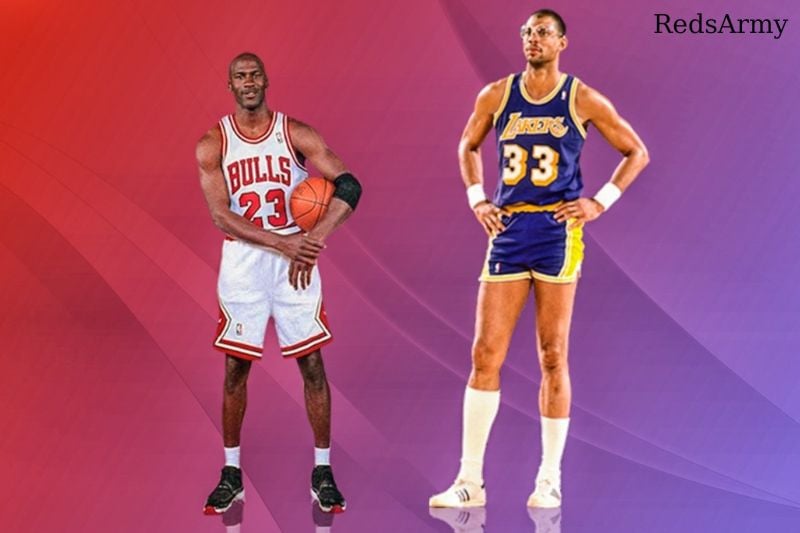 In terms of an automatic bucket in a one-on-one situation, Michael Jordan and Kareem Abdul-Jabbar are perhaps the two most unstoppable players ever, with Wilt Chamberlain as an honorable mention.

Kareem Abdul-Jabbar was arguably the most unstoppable shot in NBA history, which helped him stay in the game for as long as he did. Kareem could also hit jumpers from further away from the hoop and was a natural near to the basket. Kareem was an unstoppable force as a center in terms of intangibles and offensive savvy. Similarly, Jordan could not be stopped by even the best perimeter defenders because of his combination of agility and talent.

The difference here is that Michael Jordan had greater athleticism to score, a superior jump shot, and the ability to manufacture his own shot than Kareem. Once he had the ball, Abdul-Jabbar was unstoppable, but MJ could grab a bucket every trip down the floor. Defensively, he can lock up guys the full length of the court and took 1 on 1 game personally. Jordan was the guy when it came to overpowering anyone in a one-on-one setting. 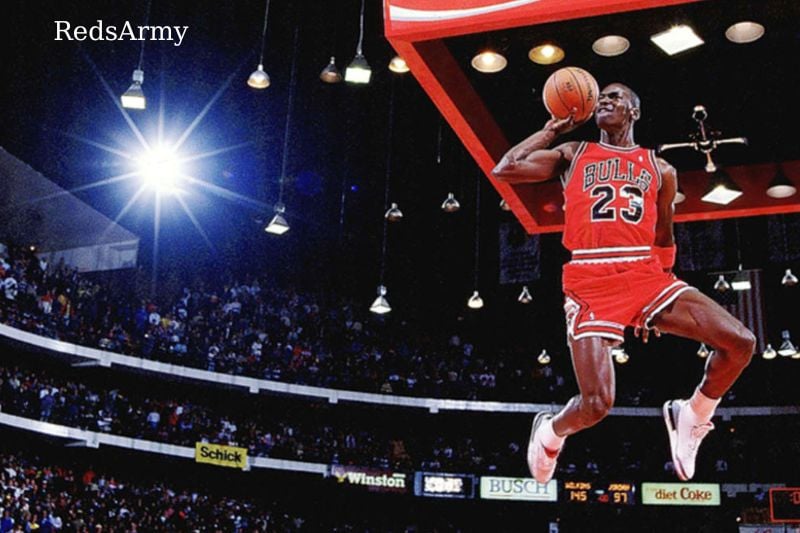 Another one that is almost too close to call. Kareem may have had the finest basketball career if college is considered since he won at every level and dominated to the highest degree. However, when it comes to NBA success, two players stand out above the rest: Bill Russell and Michael Jordan. Russell won 11 rings, but his individual achievements pale in comparison to Jordan’s.

MJ dominated the NBA in every manner as the all-time leading scorer and finest two-way shooting guard. Kareem Abdul-Jabbar comes close, yet he is outmatched when honors are compared. Jordan has won every award there is. Kareem had two Finals MVPs to MJ’s six. Jordan has ten scoring titles, whereas Kareem only has two. Jordan earned the Defensive Player of the Year award, but Kareem never did. To support his case, Kareem leads in All-Star games (19 to 14), All-NBA Teams (15 to 11), All-Defensive Teams (11 to 9) and even Season MVPs (6 to 5). While these advantages are significant, they are more of a tribute to Kareem’s endurance than sheer excellence.

Kareem had the privilege of playing with Magic Johnson, the greatest point guard of all time, which enabled him to extend his career and achieve his accomplishments. Jordan never had a teammate as outstanding as Magic, and MJ was the single most dominant superstar we have ever seen in a career. In the final category, MJ edges Kareem.

This was an excellent comparison since we may be looking at two of the greatest players of all time. MJ has reclaimed his spot as the best player of all time, even defeating probably the second-greatest player of all time. That’s not to say Kareem isn’t a terrific player; it’s simply that Michael Jordan had more intangibles and talents than any other player in history. Kareem Abdul-Jabbar comes close in several areas, but Michael Jordan consistently pushes him out because of his honors and near-perfection on the basketball court.

How many times did Michael Jordan play Kareem Abdul-Jabbar?

Kareem Abdul-Jabbar had eight games played versus Michael Jordan in his career.

Is Kareem Abdul-Jabbar the greatest basketball player of all time?

The greatest basketball player of all time is Kareem Abdul-Jabbar, and there should be no argument about it. *He won three NCAA championships at UCLA and only lost two games while winning 88 over those years. *He was the NCAA Player of the Year as both a sophomore and senior (Elvin Hayes won it in between)

Who does Kareem think is the goat?