Joel Embiid is one of the most dominant players NBA. The Cameroonian center is a force to be reckoned with on both ends of the floor, and he has already established himself as one of the best players in the league. But how tall is Joel Embiid?

Let’s be with Red’s Army to get more useful information about this superstar through the blog post. 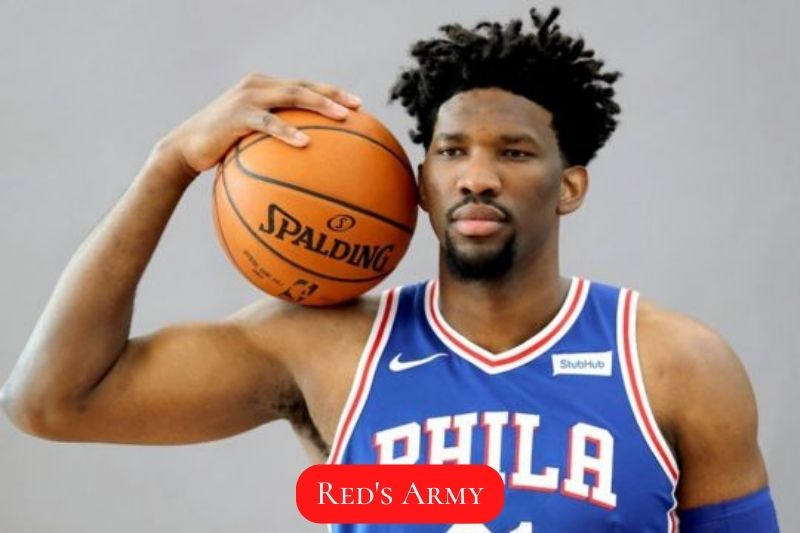 Joel was born on March 16, 1994, as Joel Hans Embiid in Yaounde, Cameroon, to parents Thomas and Christine Embiid. His father was a former handball player and military officer. He has two younger siblings who are known to exist: Muriel and Arthur, the latter of whom passed away in a car accident on October 16, 2014.

His early passion for sports led him to decide that playing volleyball professionally in a European nation would be his first career decision. After he met a local NBA player at a summer camp, that plan was abandoned.

His mentor, Luc Mbah a Moute, took him to the United States of America, where he was developed into the star he is today. He began playing basketball in 2008, and in 2011, he took part in a sanctioned game. Joel Embiid gradually modeled his play after his favorite NBA player and Nigerian-born icon, Hakeem Olajuwon.

Joel attended Montverde Academy, the high school that his mentor, Luc Mbah a Moute, attended. Still, he was unable to finish there due to the insufficient amount of playing he was receiving.

He continued his high school studies at The Rock School, a Christian academy in Gainesville, Florida. Yes, he had more opportunities to play at the university, where he amassed an excellent stat line of 13.0 points, 9.7 rebounds, and 1.9 blocks per game. Additionally, he guided the group to a successful State Championship during his senior year.

How Old is Joel Embiid?

The star moved to the United States at the age of 16 to pursue a career as a professional basketball player. 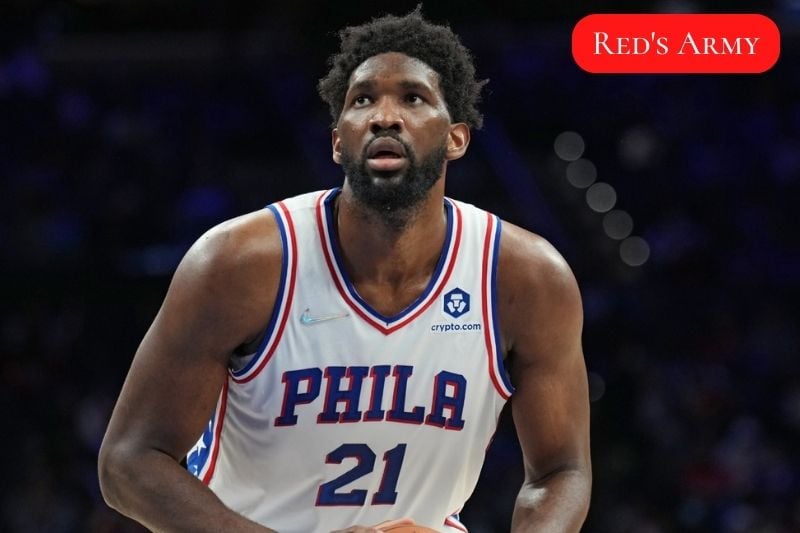 In November 2012, “The Process,” as he went by, announced that the University of Kansas would be his college of choice. Additionally, he registered to play for the Jayhawks, their basketball team.

Although Joel was only on the squad for a single season, his performance was impressive enough to place him among the 30 finalists for the Naismith College Player of the Year Award, the Big 12 Defensive Player of the Year, and second-team All-Big 12.

In March 2014, Joel suffered his first setback when he fractured his back. This season prevented him from competing in the Big 12 and NCAA Tournaments. He declared in April 2014, following his recovery from the injury, that he would forgo his final two years of collegiate basketball in favor of entering the 2014 NBA Draft.

The Philadelphia 76ers eventually selected him in the first round of the upcoming draft with the third overall choice. However, he soon required surgery for a broken navicular bone in his right foot, which prevented him from playing for six months.

Finally, he made his NBA debut in October 2016’s preseason contests. Embiid flourished as a great basketball player until February 2017, when the injury bug reared its ugly head.

Thankfully, he did not need surgery for the left knee injury, but it kept him off the courts for a while. As if that weren’t enough, he then had a swollen left knee again, forcing him to sit out for the remainder of the 2017 campaign.

Despite spending a lot of time away from the court, he was nonetheless selected for the 2017 NBA All-Rookie First Team. The 76ers extended his contract in October 2017, giving him a $148 million, 5-year deal.

Joel Embiid has, if anything, shown that he is worth the investment. In addition to being recognized as an NBA All-Star for 2018, he was also selected for the NBA All-Defensive Second Team.

Joel has played in 103 games throughout his professional career, recording 22.6 points, 10.1 total rebounds, and 2.9 assists per contest. 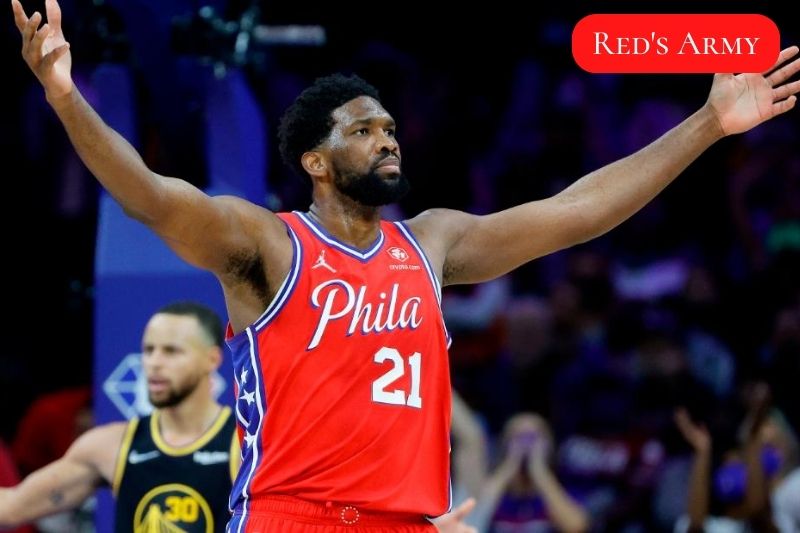 Embiid is qualified to play for the Cameroon national basketball team. Embiid was named to the preliminary team for the 2017 FIBA AfroBasket on February 7, with the group qualification taking place in March, during the NBA regular season.

The competition will be held in the Republic of Congo. The NBA player Luc Mbah a Moute, who is also of Cameroonian descent, expressed his support for Embiid representing his nation, stating, “It would be wonderful for our team, our country, and Joel.” At AfroBasket 2017, Embiid ultimately decided not to represent Cameroon.

Embiid started the procedure to become a French citizen in 2022, which would let him represent the French national team. He received his citizenship on July 4, 2022, as a result of his status as “a foreigner […] whose naturalization is of extraordinary interest.”

Embiid’s Joel’s deal The player signed a supermax contract deal toward the end of last year, keeping him in Philadelphia through the 2026–2027 NBA season. He will reportedly receive $196 million over the course of his new four-year contract, which will start during the 2023–24 NBA season and include a player option for the final season.

After being selected for the All-NBA second team for the 2020–21 campaign, he qualified for the supermax extension. Sources estimate that Joel Embiid’s net worth will be around $35 million in 2022. 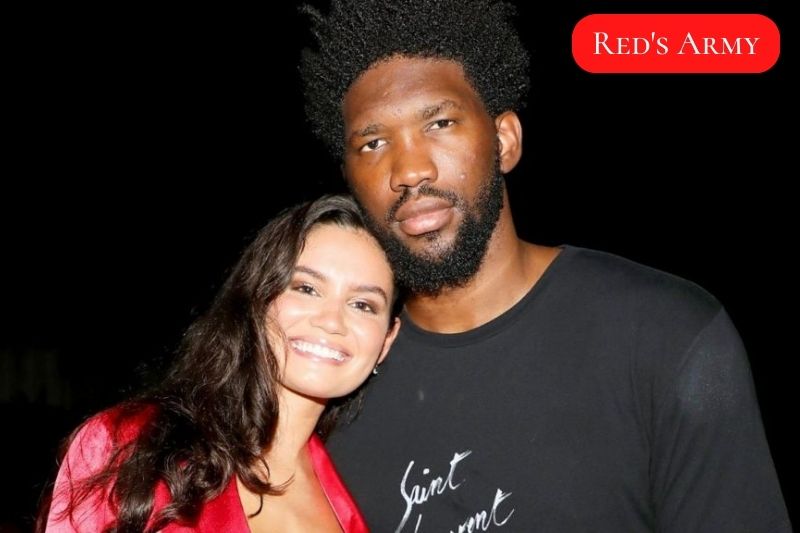 Despite having a fun personality and a strong social media presence, Joel has made a great effort to keep details of his relationship private. The appealing basketball player was recently spotted on Twitter, asking the well-known Barbadian singer, Robyn Rihanna Fenty, out.

He seemed to be crushing on the world-famous star when he overtly asked her if she was single as a single, good-looking young man who was not yet in a committed relationship.

The vocalist Rihanna was born in Saint Michael, Barbados, on February 20, 1988, and immigrated to the US as a teenager. She is currently rumored to be dating Saudi businessman Hassan Jameel, who comes from a family that is among the wealthiest in the world.

According to Forbes, the family is estimated to be worth £1.1 billion, placing them as the 12th wealthiest Arabs in the world. Rihanna and her boyfriend were also spotted together as he escorted her to a Grammy after party.

Joel is now single and not in a committed relationship with any girl, while Rihanna has yet to respond to the basketball player’s query formally. He is undoubtedly more focused on his basketball career right now.

How Tall is Joel Embiid? 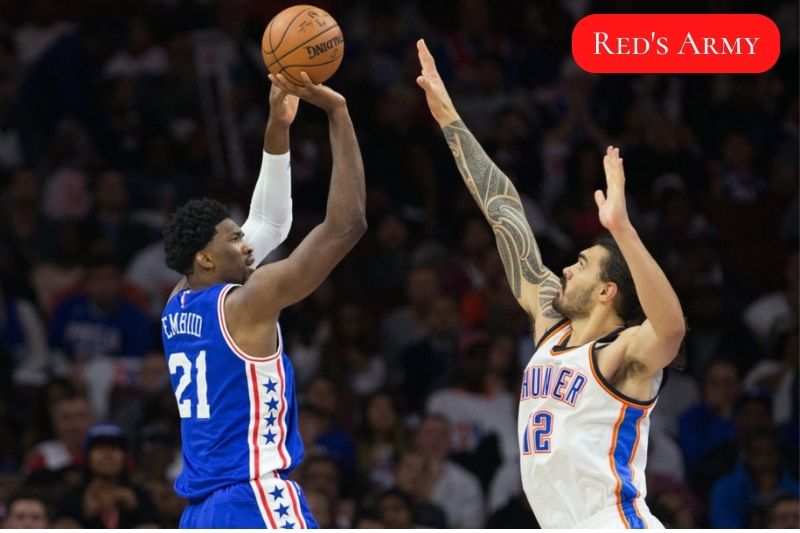 It’s critical to respond to the topic of Joel Embiid height before delving further. The center for the Sixers is among the top one percent of NBA players at seven feet tall. His wingspan is 7 feet 5 inches long and weighs 280 pounds.

He is, without a doubt, one of the biggest players in the NBA when all those other dimensions are considered. Although many tall athletes are in the league, only a few can match Embiid’s size. He is excellent in the post and on defense because of this.

The Joel Embiid height is really advantageous for two reasons. Thanks to his size, he can successfully block shots, grab rebounds, and score from inside the paint.

He has a significant size advantage over almost every other center in the league because of his 280-pound body.

Additionally, Embiid can score outside the paint. He stands out from other big men who can only play down low because of this.

Being able to shoot well from beyond the arc is crucial because the NBA has heavily turned to outside shooting in recent years.

Every contemporary superstar has some kind of outside chance. Embiid is exceptional in that regard because he also has an outside shot and is extraordinarily tall.

He had a 37.1 percent long-range shooting percentage in 2021–2022. That puts him in front of many lesser-known athletes.

Embiid is difficult to guard because of his height and ability to shoot from a distance. Defenders are never sure if he will pull up or get inside. His wingspan and height combine well enough to make him nearly hard to contest or block, even if he does stop to shoot. 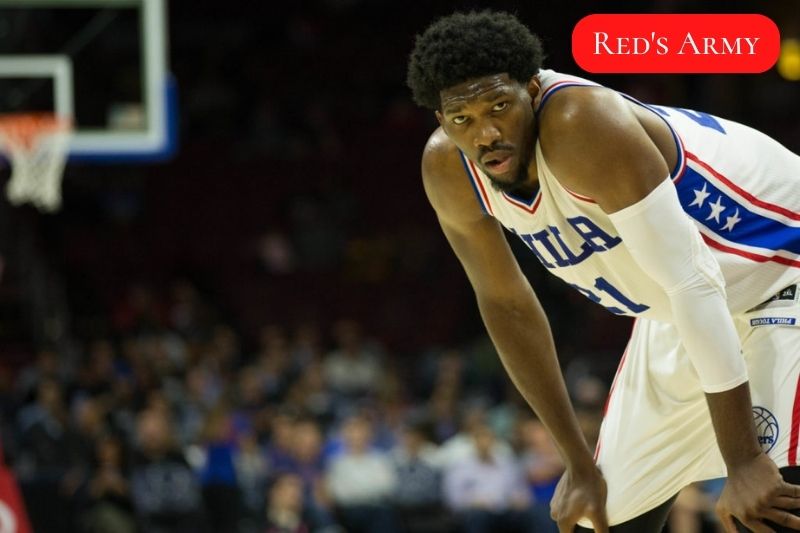 Looking at the rest of the league can provide more context regarding Embiid’s height. Although centers have always been large (with their average height reaching a peak in 1987), recently, they have shrunk. In fact, the average NBA center stands 6’10 due to the push for speedier attacks.

Knowing that makes it simple to comprehend why Embiid is such a dominant force when compared throughout the league. In addition to being overweight, he towers over everyone he plays by at least two inches at seven feet tall. Few can equal the dual threat this provides.

Additionally, it appears that centers will only get smaller or speedier in the future, given the current movements. For many teams, that’s not bad, but it means that Embiid’s height will only grow in value over time.

Joel Embiid is one of the most dominant players in the NBA today. The 7-foot center for the Philadelphia 76ers is a force to be reckoned with on both ends of the floor. Though he’s only been in the league for a few years, Embiid has already made a name for himself as one of the best big men in the game.

Hopefully, you can find it helpful in this article. Thanks for reading!