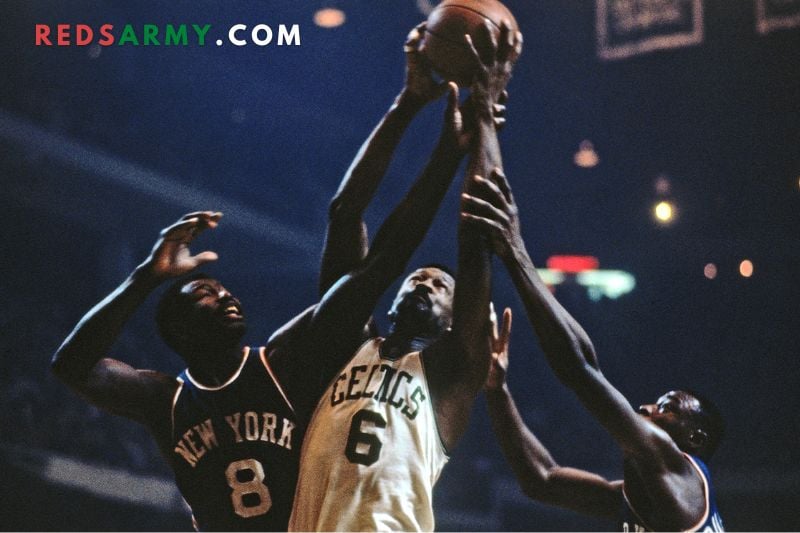 Bill had attended McClymonds High School in Oakland, California, a public high school. He enrolled in the University of San Francisco in 1953 and graduated in 1956. He had guided the university team, the San Francisco Dons, to consecutive NCAA (National Collegiate Athletic Association) titles in 1955 and 1956, a dream run that featured an incredible 55-game winning streak. 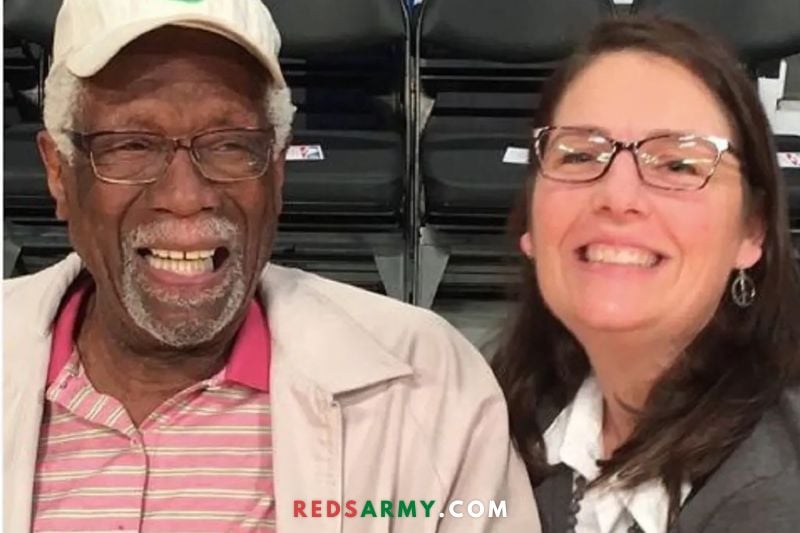 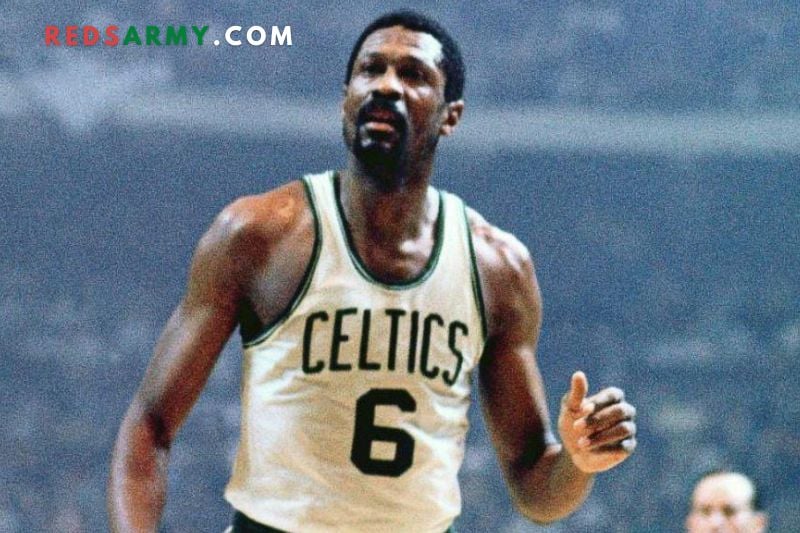 William Felton Russell played center for the Boston Celtics of the National Basketball Association from 1956 until 1969 (NBA).

Russell and Henri Richard of the National Hockey League share the record for most titles an athlete in a North American sports league won.

Russell is recognized as one of the greatest basketball players of all time. He led the San Francisco Dons to back-to-back NCAA championships in 1955 and 1956 and captained the gold-medal-winning American national basketball team. 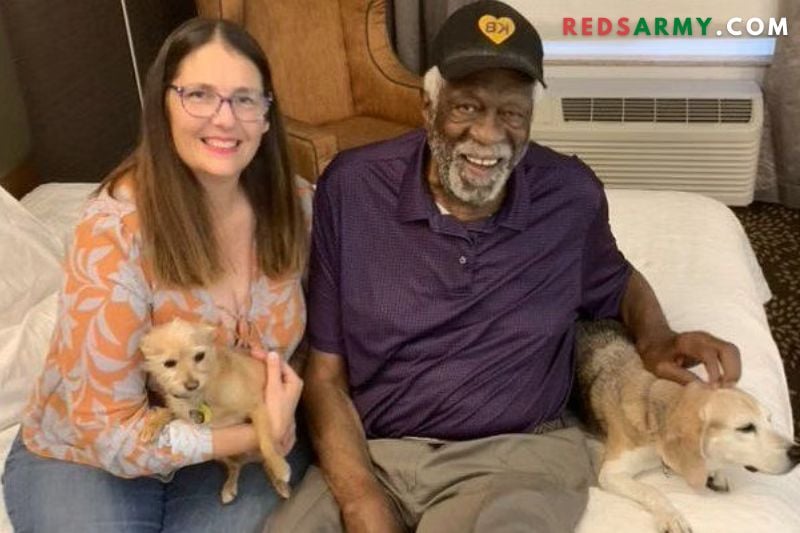 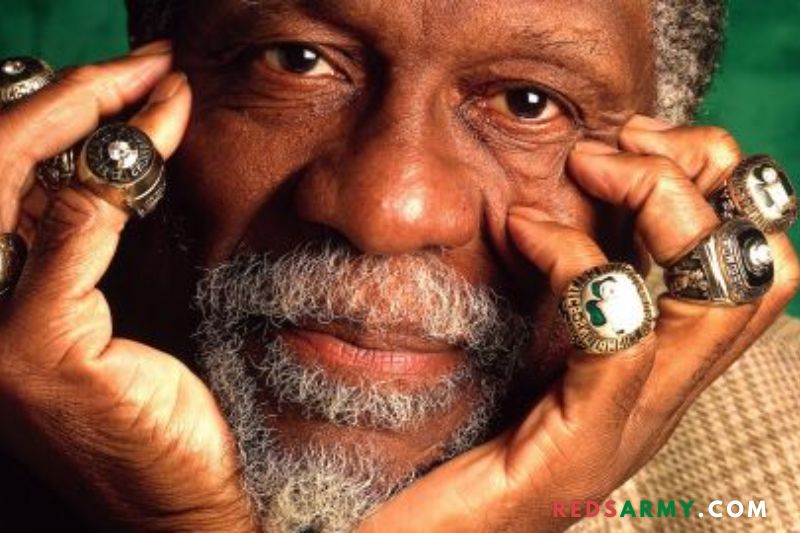 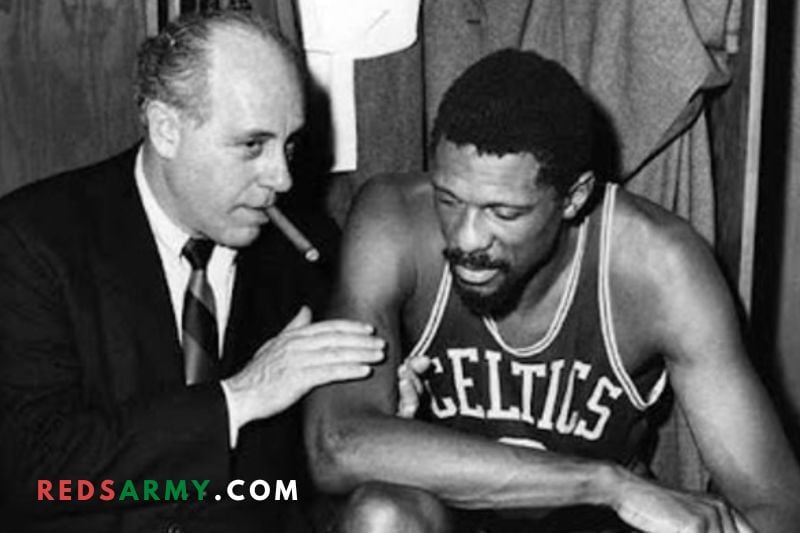 In 2011, he was inducted into the ESPN Boston Hall of Fame with Red Auerbach, Larry Bird, Bobby Orr, and Ted Williams as part of the first class.

In 2000, he was inducted into the Sport in Society Hall of Fame.

The Professional Basketball Writers Association of America named him the greatest player in NBA history (1980). 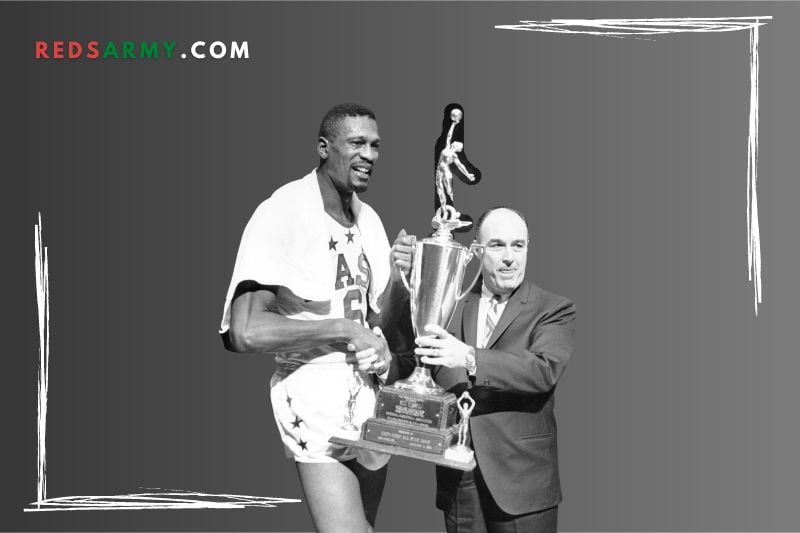 Most legendary Celtics were either far gone or had just retired by 1969. Except for burgeoning phenom John Havlichek and elderly great Sam Jones, the historic Boston Celtics were down to only Bill Russell.

Russell now faced the daunting task of taking a bottom seed and defeating some of the best teams of all time, including a newly revamped Philadelphia team following the Chamberlain trade, whom they defeated, and the New York Knickerbockers, led by Willis Reed, Walt Bellamy, and Walt Frazier, whom they defeated in six games, and setting up the match for the Los Angeles Lakers, who now had Chamberlain.

Chamberlain, Jerry West, and Elgin Baylor were never able to beat the Celtics. This year, the Lakers sought to defeat the Celtics in the Finals for the first time, led by Gail Goodrich and Happy Hairston, and a strong bench featuring future Laker Coach Pat Riley.

After winning the first two games, the Lakers lost the following two at the Boston Garden. The Celtics fell to Los Angeles in Game 5 at the Forum before returning to the Boston Garden to win Game 6. Game Seven of the Finals was one of the most iconic games in American sports history.

Jack Kent Cooke, the Los Angeles Lakers owner, had packed the rafters with purple and yellow balloons and planned to release them after the Lakers won. When Bill Russell found out about this, he said to his colleagues, “We’re going to have to do something about it.” After the game, unpopular coach Butch van Breda Kolff removed Wilt Chamberlain from the game.

“We’re doing OK without you,” van Breda Kolff said to Chamberlain. It was not enough to overcome the Celtics, who won by just two points without Chamberlain and an injured Jerry West. Russell said Chamberlain was tired and should have requested to return to the game. The two, who had previously been friends, were now estranged.

Russell knew he’d won, but he wanted to beat Chamberlain and didn’t. The contest lasted seven games when it could have been far shorter. The Celtics, apparently beyond their prime, were guided to their eleventh title by Bill Russell. They were just the third team to repeat as champions, the first being the Minneapolis Lakers and the second being the Boston Celtics. Russell was unquestionably a champion. 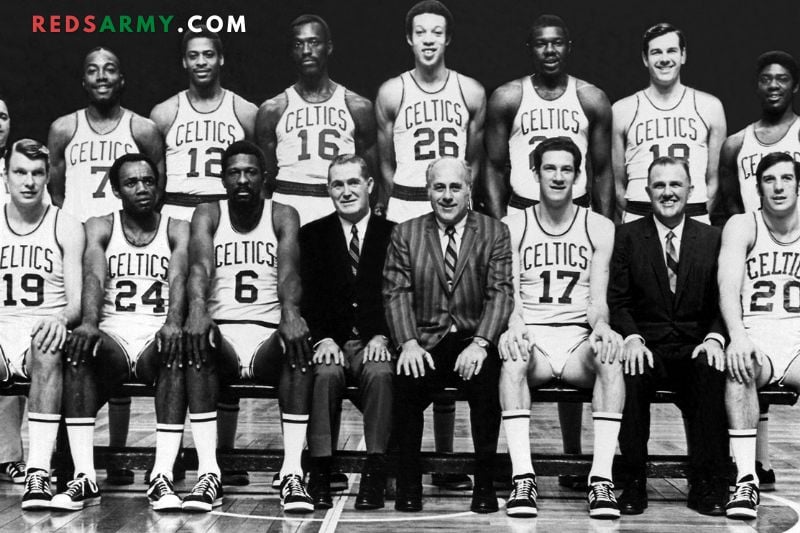 But it was Bill Russell who defeated the Sixers in 1968 since he was no longer the team’s heart and soul on the court but as its head coach, which he became in 1967 when icon Red Auerbach resigned.

In 1968, he defeated the Sixers in a tense Conference Final series before handily defeating the Lakers in the Finals. After the season, Wilt Chamberlain was moved to the Los Angeles Lakers, bringing him to the Boston Celtics’ second archrival.

The Philadelphia 76ers defeated the Boston Celtics in 1967, although the Celtics were not nearly as good in 1966 and 1968.

He would not be deterred by his setback in 1967.

Wilt Chamberlain was transferred from the Golden State Warriors to his new home team, the Philadelphia 76ers, in 1966. For the first time in the Bill Russell-Wilt Chamberlain rivalry, Chamberlain could not claim that he did not have the squad to defeat the Celtics, even though many argue that the Celtics were equal to, if not lesser in skill to their numerous competitors.

On November 16, 1957, he set the NBA single-game record for most rebounds in half (32) against Philadelphia. 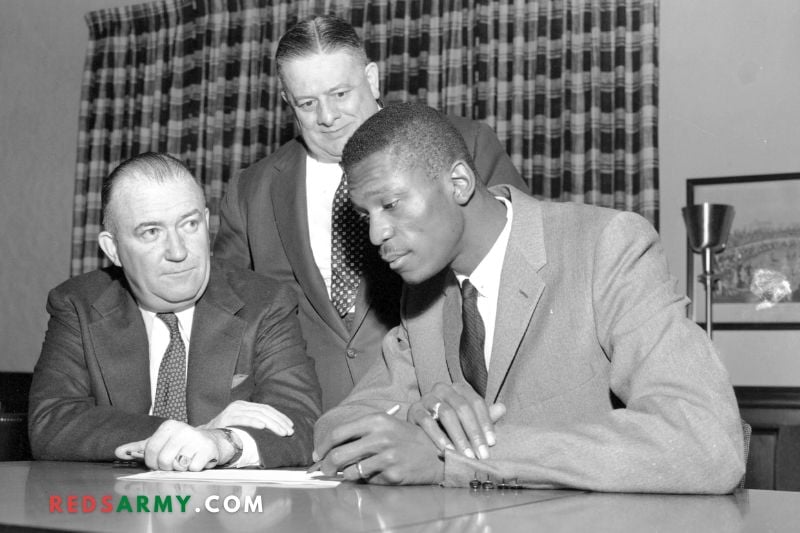 Bill Russell joined the NBA draft in 1956. He was picked second overall by the St. Louis Hawks but was dealt to the Boston Celtics for Ed Macauley in a move facilitated by Boston Celtics coach Red Auerbach. Macauley was part of a strong offensive line that included Bob Cousy and Bill Sharman, but the squad lacked a piece of the jigsaw. As America would soon discover, Bill Russell would be that missing piece.

Although Bill Russell played in less than 50 games owing to his Olympic gold medal in basketball, he made his presence known in his debut NBA season. Russell Defense was a new facet of basketball that had never been addressed previously. Bill Russell understood that the key to winning basketball was to deny your opponent from scoring.

Bill Russell saw basketball as science and approached the game analytically and emotionally. Russell also played the game mentally, guarding his numerous opponents so brilliantly that he often made those he protected believe they couldn’t make a basket. This focus would not only pay dividends in the Olympics and college but would also have an instant effect in the NBA. 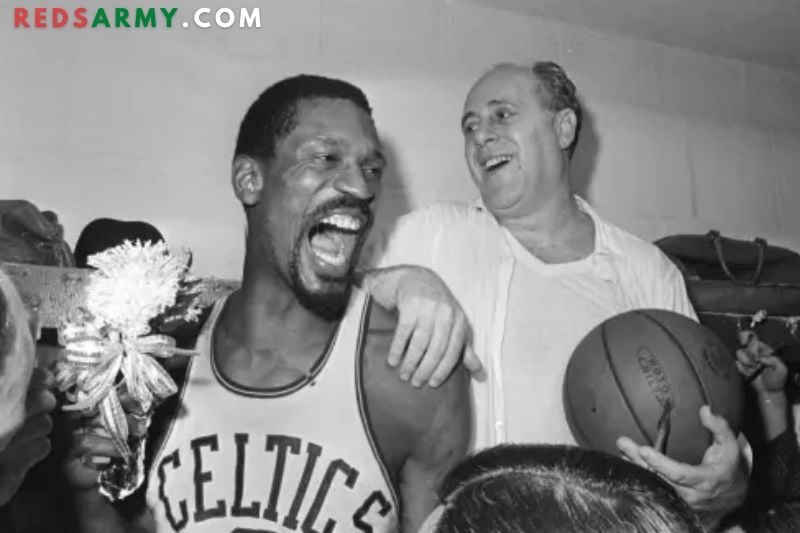 Russell battled bigotry from even the most ardent Celtics fan while changing Boston sports history. Bill Russell Mercer island home was robbed many times, and he learned through a reporter that he would not get MVP because he was black. Nonetheless, Bill Russell was unquestionably one of the best players of his day. The most memorable years in the Boston Celtics’ long history of domination over the NBA came in his last years.

At 18, he enrolled at the University of San Francisco, where he won two NCAA Championships in 1955 and 1956. 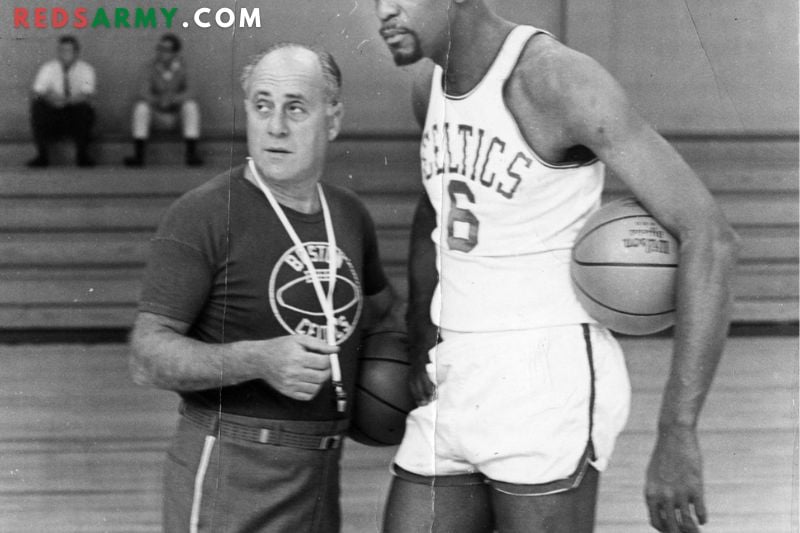 In 1954, he was selected as a territorial draft pick by the St. Louis (now Atlanta) Hawks. The Hawks transferred his draft rights to the Boston Celtics in exchange for Cliff Hagan and Ed Macauley. After a brief experience with the Harlem Globetrotters, he joined the Celtics mid-season in 1956-1957. That season, he led the Celtics to their first 11 NBA championships in 13 seasons.

How old is Bill Russell now?

Bill Russell, one of the most recognizable players in NBA history, died on Sunday at 88.

How much does Bill Russell weigh?

How much money did Bill Russell make in the NBA?

Despite winning eleven NBA titles with the Boston Celtics between 1956 and 1969, appearing in twelve All-Star games, and being voted league MVP five times, Bill Russel never made more than half a million dollars.

Was Wilt better than Bill Russell?

Wilt was the superior regular-season player, but Russell shone in the playoffs. Wilt was non-existent in the clutch or critical circumstances, but Russell flourished in them. Wilt averaged 50 points per game in 1961-62 when Russell was awarded the league’s Most Valuable Player.

Who was Bill Russell’s rival?

Russell would lead these teams past some of the best players in history, including Jerry West, Elgin Baylor, Hal Greer, and his most famous nemesis, Wilt Chamberlain.

Bill Russell is one of the most successful basketball players of all time. He has won numerous championships and awards and is considered one of the greatest players in history. Thank you for taking the time to read this overview of Bill Russell by Redsarmy.com.