Basketball is a sport that is enjoyed by people of all ages. The game is simple, yet challenging, and can be played in a variety of ways. Whether you’re shooting hoops at the local park or playing in a competitive game, basketball is a great way to get active and have fun.

One important game element is the hoop, which scores points. But how tall is basketball hoop?

How Tall Is A NBA Basketball Hoop?

The standard basketball hoop height for basketball players over the age of 12 is 3.05 meters (10 feet)

As for professional practice and competition, the basket’s height should be at this level.

The average hoop height for basketball players between the ages of 11 and 12 is 2.74 meters (9 feet) 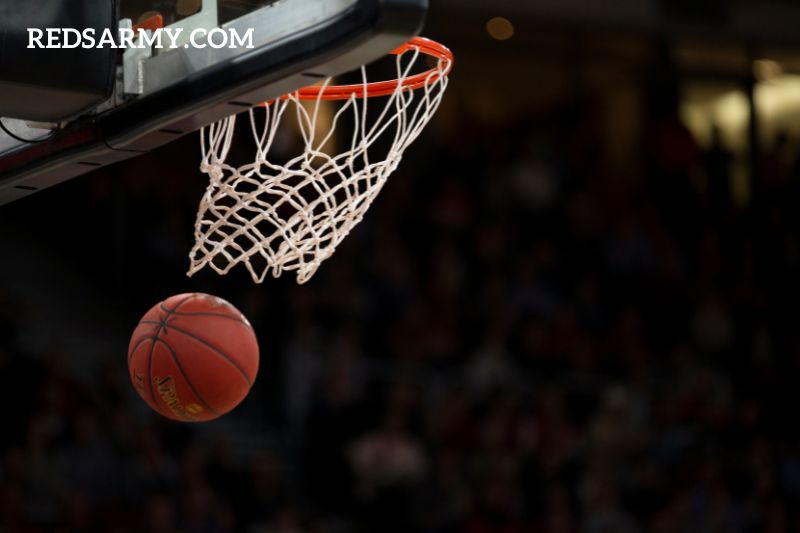 What Is The Height Of A Basketball Rim?

As a result, people will categorize it into different degrees depending on their age. 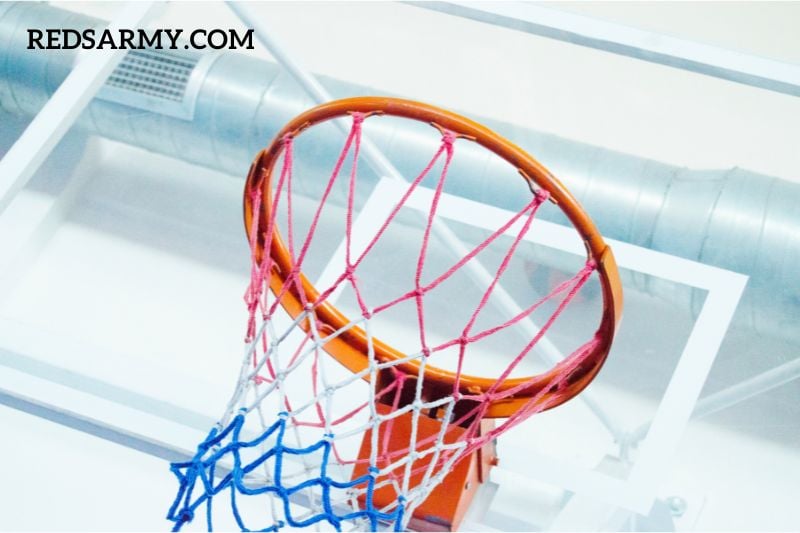 Why is a Basketball Hoop Ten Feet Off the Ground?

Hoops are often 10 feet (3 meters) above the ground in gyms, parks, and driveways worldwide. Some youth leagues use shorter hoops, but from junior high school onward, the game is played on the traditional 10-foot-tall hoop.

In 1891, James Naismith founded the sport by hanging peach baskets on the railing of a running track at the YMCA gym in Springfield, Massachusetts, and the railing was 10 feet off the ground.

It was a last-minute decision by Naismith to put the baskets on the railing that has lasted to this day. A soccer ball was used instead of a basketball because the basketball had not yet been conceived, and players were not allowed to dribble or move around with the ball while it was in their control. 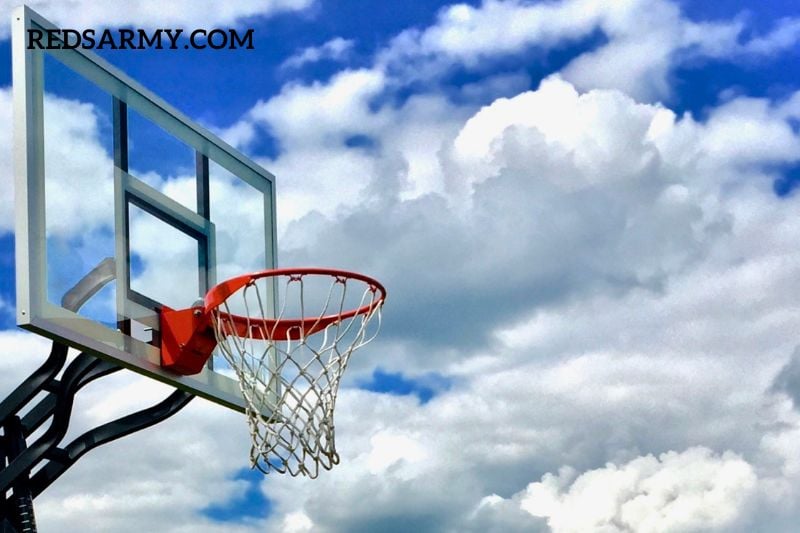 But even when the peach baskets were replaced with iron hoops, the goal remained 10 feet above the ground, requiring a ladder to retrieve the ball when a successful shot. There have been calls to raise the hoop heights at higher levels of play to make it more challenging to make a shot as the game and its players have grown.

Even though today’s players have an easier time of it, it’s unlikely that the hoops’ height will change because of the beauty of the modern basketball game.

How Do you Measure the Ten Feet for a Hoop?

A basketball hoop’s ten-foot measurement is taken from the rim’s height to the floor. Fans may not be aware that the teen feet measures are not taken from the bottom of the net. Since the ball must be at least that high to go through the hoop, the measurement for height is based on the rim’s peak. 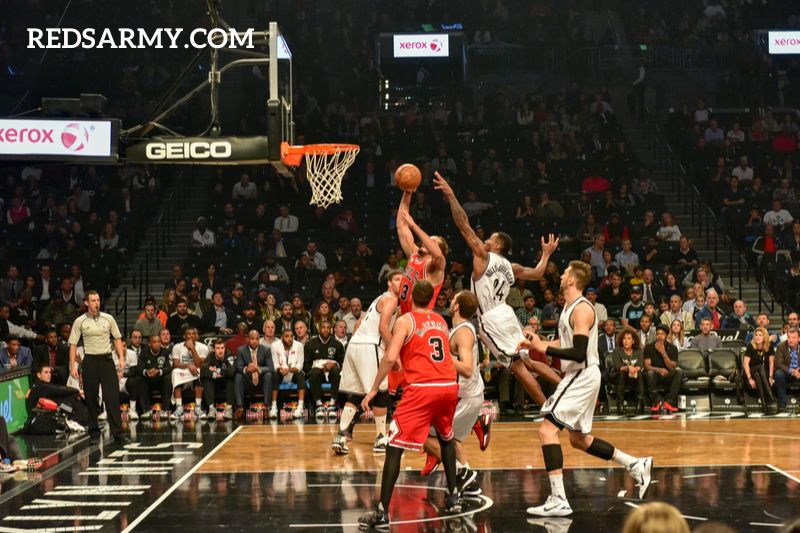 How Tall Is A Basketball Hoop?

To put it another way, professional NBA hoops measure ten feet from top to bottom. Because basketball players are getting taller, dunking has become more prevalent in today’s game, despite the hoop’s 10 feet being the same.

A WNBA hoop is ten feet tall from the rim to the bottom of the floor. TFI Global News reports that the average height of a female basketball player is 5’11”. The WNBA is seven inches shorter on average than the NBA, so you can see why dunks are less prevalent in the league. 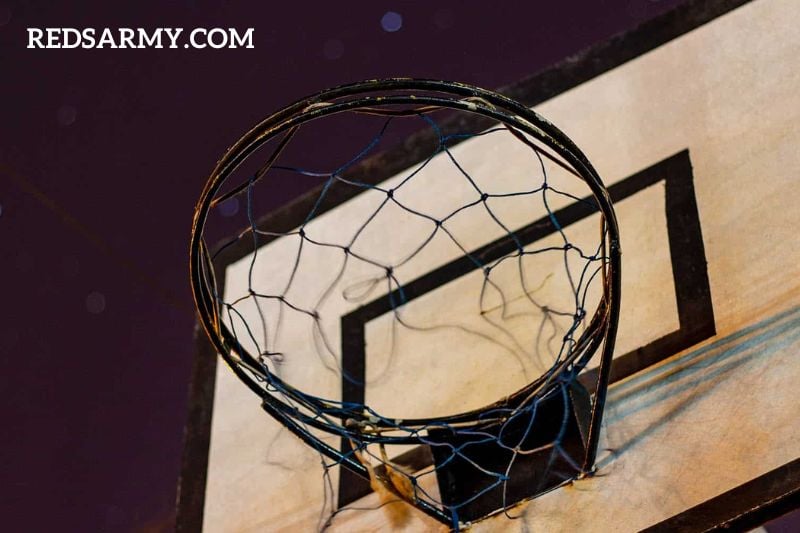 The Olympic and professional basketball hoop, used by all leagues worldwide, is ten feet tall.

Basketball in the NCAA is 10 feet in length from the top of its rim to the bottom of its court.

Does the Rim Height Change in Youth Basketball Leagues?

The rim height on a basketball court varies depending on the level of a youth basketball league. The hoops in kindergarten leagues will be seven feet high. Meanwhile, the hoop will stand nine feet tall for fifth graders. The hoop does not reach its usual ten-foot height until sixth grade. 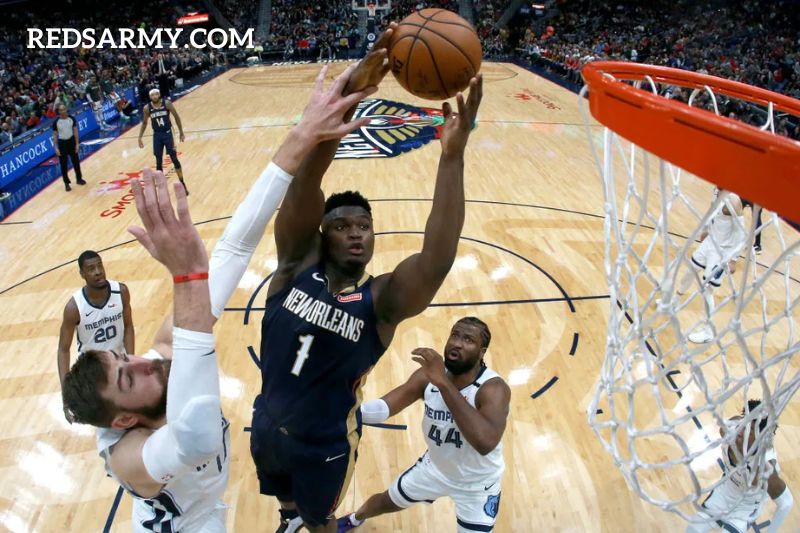 How Big is the Basketball Backboard?

The dimensions of a standard basketball backboard are six feet wide by three and a half feet high.

How Big is the Basketball Rim?

Did the Hoop Size Ever Change in the NBA?

The NBA experimented with raising the basketball hoop to a height of 12 feet in 1954. To prohibit George Mikan from dominating the game, the 12-foot-high rims were necessary. The matchup between the Milwaukee Hawks and the Minneapolis Lakers was the one that was put to the test.

Although the test only lasted one game, however even though it prevented George Mikan from dominating the game, the trial found that it had negative consequences for the game. Because of the hoop’s increased height, taller players could acquire an advantage in the rebounding battle versus shorter players. 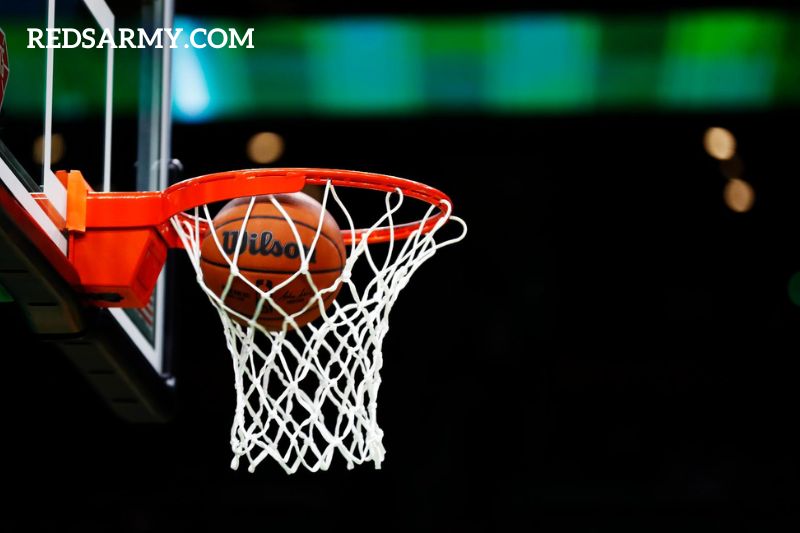 Basketball’s origins can be traced back to peach baskets, into which players would attempt to shoot the ball. Iron hoops replaced the peach basket as time passed, allowing the ball to go through on a successful shot. After a successful shot, a ladder was no longer required to retrieve the ball.

Why Do Basketball Hoops Have an Orange Rim?

The orange rim is visible to spectators, coaches, referees, and players during games. An additional benefit of the orange paint is that it can be used to identify goaltending offenses, such as a player swatting the ball away as it falls toward the hoop. 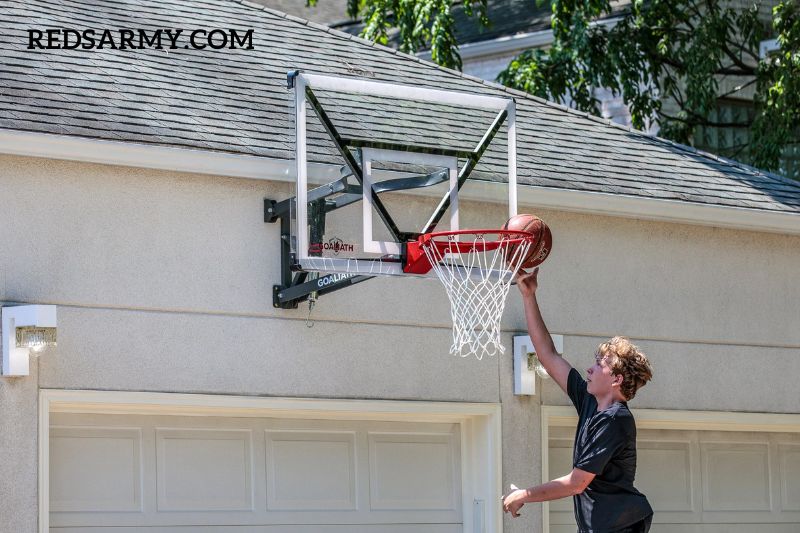 Can Players Change the Hoop Regulation Height During a Dunk Competition?

Players in the NBA that participate in the dunk competition like entertaining the crowds. A 12-foot-high basketball hoop was installed in 2009 by Dwight Howard. At the All-Star Game, he wore a superhero costume and performed the dunk to please the crowd.

Consequences Of Setting The Ball Hoop Too High Or Too Low

Case 1: The hoop is too low

You must learn the consequences of playing at an incorrect height. Generally speaking, most basketball aficionados prefer to practice with a lower-than-average basket.

Most of the time, this does not impact their performance on the pitch. It’s possible to lag in your skill development by playing for an extended period with a rim height that’s too low.

Playing with a low basket makes things a lot easier. But don’t let yourself become used to it. You won’t be able to go any further because of that. 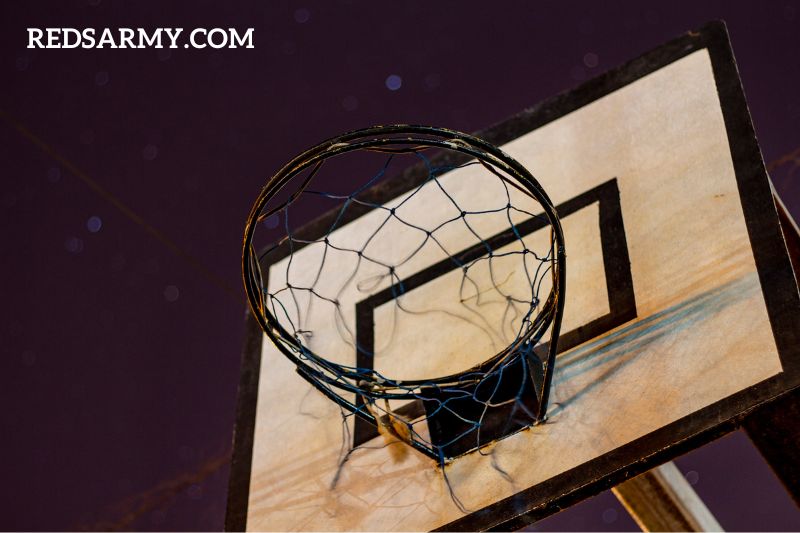 Case 2: The hoop is too high

Is it good for young footballers to start practicing with a high basketball hoop?

The average NBA basket height is 3.05 meters in most basketball leagues around the country. Is it beneficial for children to begin playing at this height?

Using too high baskets for a child’s current height is dangerous. Because children’s ability to throw will be negatively impacted, they’ll be a significant adjustment.

How long is a basketball game?

It takes, on average, two and a half hours for an NBA basketball game to complete. Even though an NBA game lasts only 48 minutes, the clock is frequently paused for fouls, timeouts, and when the ball goes out of bounds. 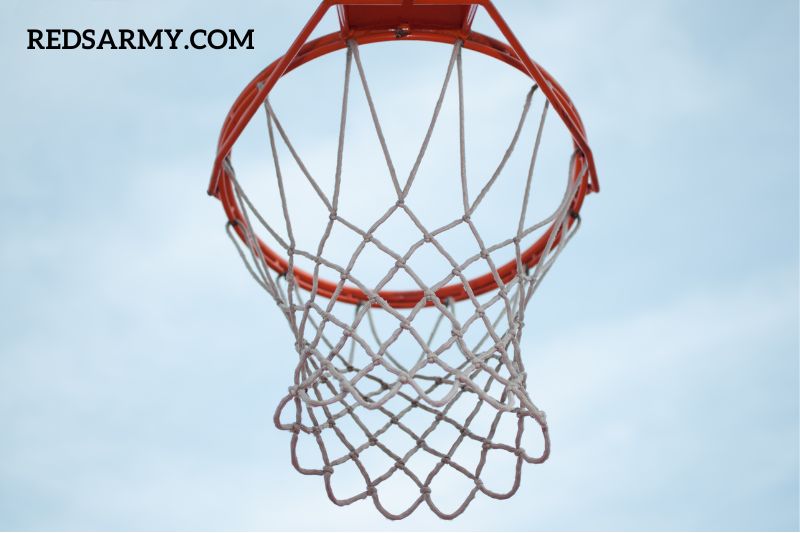 What is a triple-double in basketball?

Triple-double in basketball refers to a player’s performance in three statistical categories (points, assists, rebounds, steals, and blocked shots) when the player attains a double-digit figure.

What is the length of a basketball match?

To play basketball, what is the minimum height requirement?

The rims have a 3.05 m diameter. When a player jumps, he will be closer to the ball if he is tall. In addition, it serves to deter players from leaping for the ball to get it into the basket.

One exception is a player with a low stature who performs well in the majors. However, height is undoubtedly a trait that provides several advantages. Pitching in the 3-point range necessitates considerably more precision.

Read more: How To Play Basketball And Dominate The Court: The Ultimate Guide

Can I Make A Basketball Pole?

If you don’t have the money to buy basketball poles, you can create your own from scratch.

While the game of basketball has changed a lot over the years, one thing remains the same – the height of the rim. The 10-foot height is perfect for players to dunk on, and it just so happens that this is the standard for professional and college leagues. You can read more information When Was Basketball Invented: The History And How It Became The Popular Sport It Is Today