The Detroit Pistons Overview is a basketball team that has been around since the 1940s. The team is currently a part of the Eastern Conference in the NBA. The Pistons have won 3 NBA championships and have made it to the playoffs many times.

The team is based in Detroit, Michigan. The Pistons have a long and storied history in the NBA. The Pistons were founded in 1941 as the Fort Wayne Zollner Pistons, a team in the National Basketball League. The team was named after its owner, Fred Zollner, who owned a piston manufacturing company. 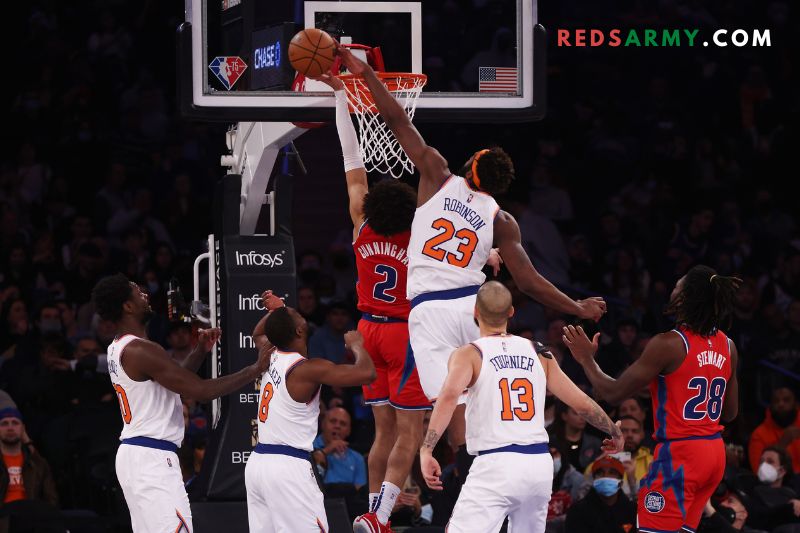 The Detroit Pistons team was founded in 1937 in Fort Wayne, Indiana. Under the direction of founding owner Fred Zollner, the team competed in the National Basketball League. Because Zollner’s company made pistons for autos, he christened his squad the Fort Wayne Pistons. In 1949, the club entered the National Basketball Association and was assigned to the Central Division, which included Rochester, Minneapolis, Chicago, and St. Louis.

The Fort Wayne Pistons reached the NBA Finals twice in the 1950s but never won a title. Zollner believed that his club could not compete in a tiny market city. Thus he announced the Pistons’ relocation to Detroit, Michigan, in 1957. Zollner preserved the Pistons moniker since it was consistent with Detroit’s automotive heritage.

The Pistons spent their first four seasons in Detroit at Olympia Stadium before moving to Cobo Arena in 1961. The Pistons suffered multiple losing seasons from the late 1950s through the 1970s, but the team featured great individual players who became all-stars, notably Dave DeBusschere, Dave Bing, and Bob Lanier.

Zollner sold the Pistons to Bill Davidson for $6 million in 1974. The franchise relocated to the Pontiac Silverdome in 1978. They had a bad run in the late 1970s. Isiah Thomas was chosen in 1981 to play in 12 All-Star Games during his 13 years with the Pistons. Chuck Daly took over as head coach in 1983, and the Pistons made the playoffs for nine consecutive seasons during his tenure.

The Pistons returned to the Palace of Auburn Hills in 1988. The team’s rugged and aggressive style of play earned them the moniker “The Bad Boys of Basketball.” Isiah Thomas, the team’s captain, thrived with Joe Dumars, Bill Laimbeer, Rick Mahorn, Dennis Rodman, Adrian Dantley, Mark Aguirre, and the rest of the squad. They won back-to-back championships in 1989 and 1990, dethroning the Los Angeles Lakers and beating the Portland Trail Blazers.

After Daly, Thomas, and Laimbeer retired, the club slid into mediocrity in the 1990s. Even though the team picked Grant Hill and other important players, they could not return the franchise to its winning ways of the previous decade. The Pistons traded Grant Hill to the Orlando Magic in 2000.

The Pistons signed Ben Wallace, an unknown at the time, and within two years, they were back on track, reaching the Eastern Conference Finals six years in a row, a franchise Pistons record. During the same period, the Pistons made two consecutive NBA Finals appearances. They won the title in 2004 with a starting lineup that included Richard Hamilton, Chauncey Billups, Rasheed Wallace, Ben Wallace, and Tayshaun Prince.

The Detroit Pistons relocated to Little Caesars Arena in 2017, sharing space for the first time since Olympia Stadium. 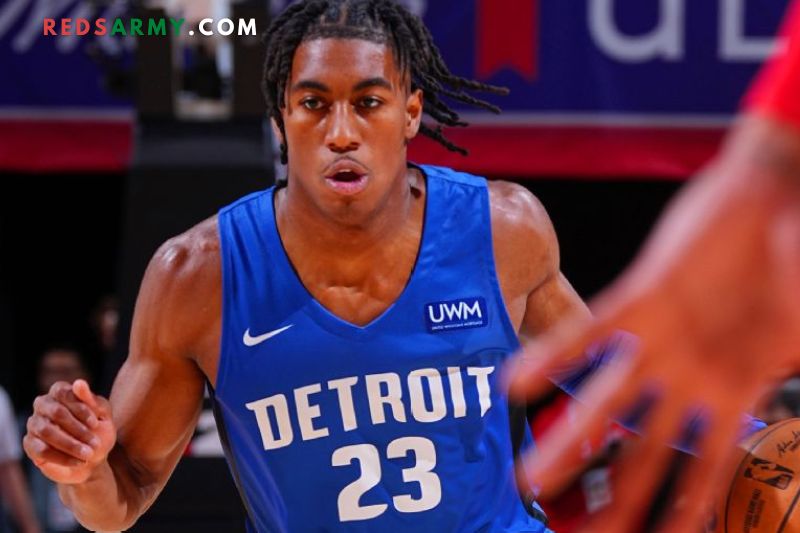 Do the Detroit Pistons have Sun’s big Deandre Ayton on their free agent radar this summer?

According to Bleacher Report’s Eric Pincus, Detroit may chase Ayton this summer, but Phoenix is anticipated to keep him.

Struggles with efficiency in loss

Impact Bey required 15 shots to put up 14 points, although, to be honest, the entire team struggled in a blowout 46-point defeat to one of the greatest teams in the Eastern Conference. With Jerami Grant (finger) out, at least Bey remains steady as the Pistons’ go-to offensive guy. He has scored in double figures in all but one of his past 13 games, reaching the 15-point mark nine times. 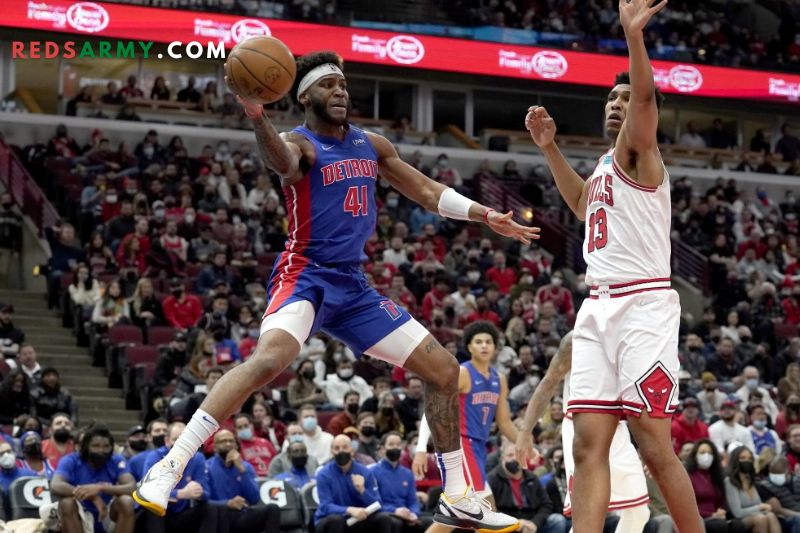 The Chicago Bulls defeated the Detroit Pistons 133-87 thanks to Nikola Vuevi’s 22 points and DeMar DeRozan’s 20 points and 12 rebounds. 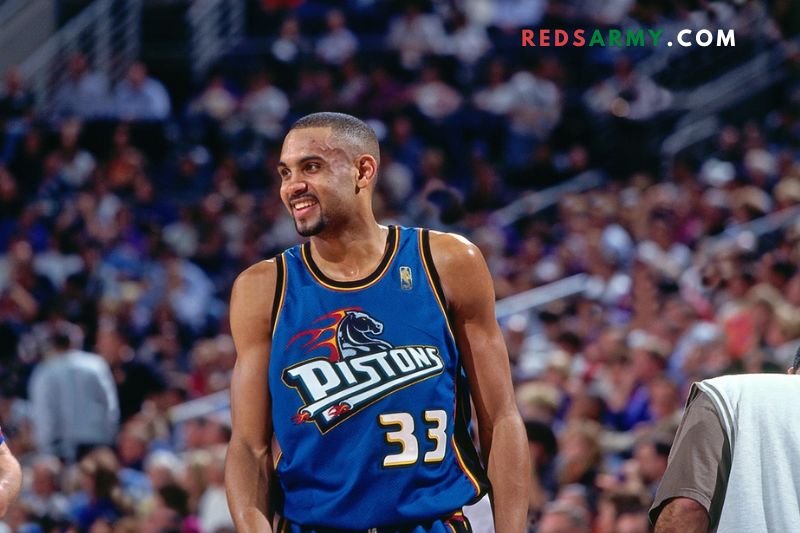 Grant Hill’s journey to the NBA Hall of Fame was not without its challenges. 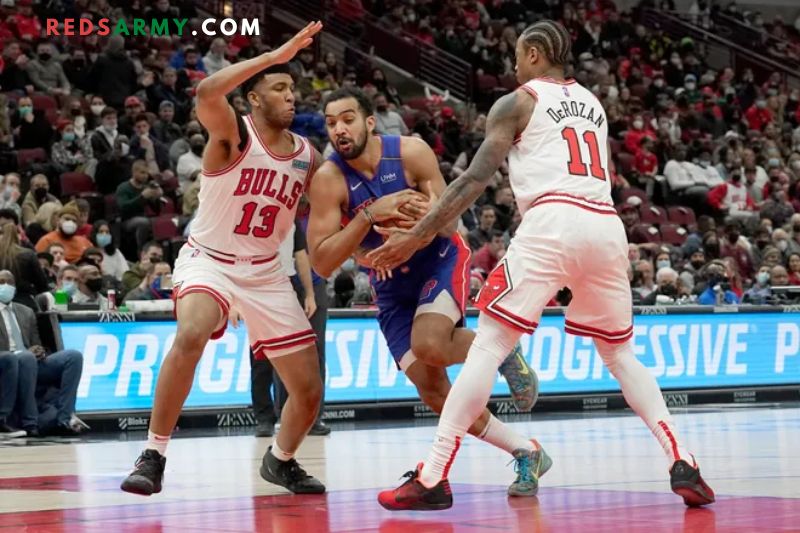 The Pistons committed 18 turnovers, allowing the Bulls to score 27 points in a 133-87 loss in Chicago on Tuesday night. 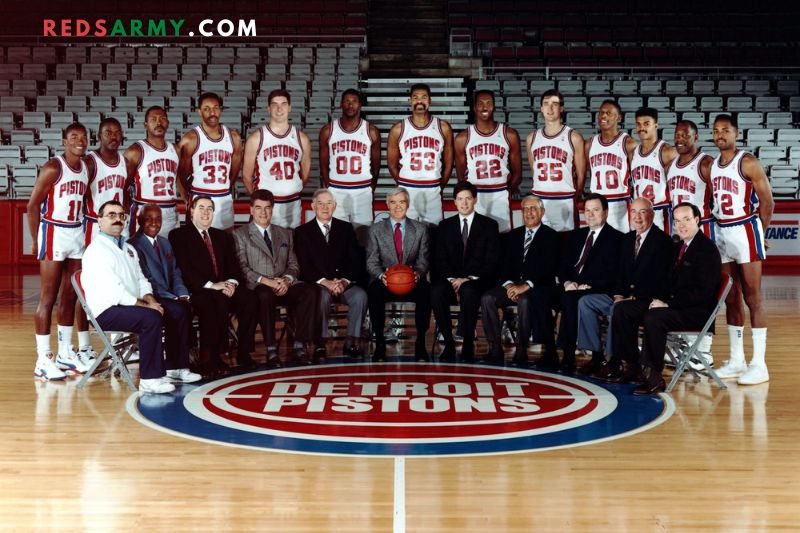 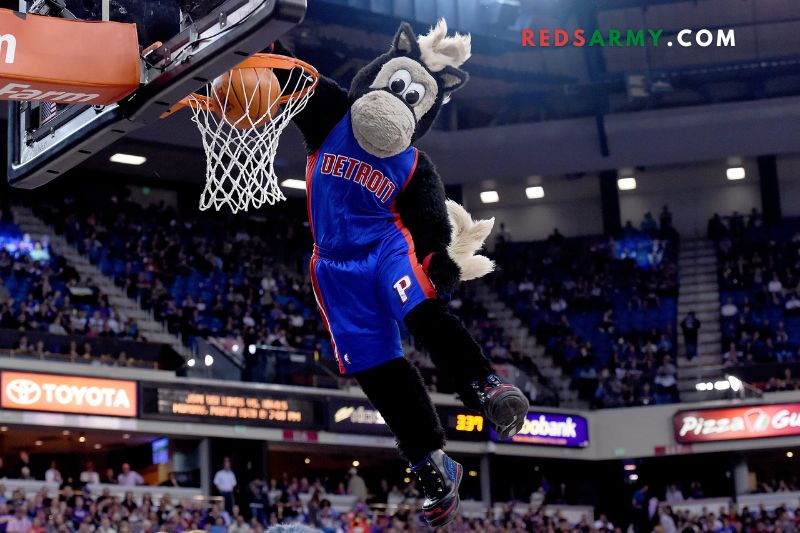 The Pistons’ mascot is Hooper. He is shown as a horse wearing a Detroit Pistons jersey. The meaning is that, like the pistons after which they are called, the team creates horsepower, therefore the equine mascot. Hooper joined the squad on November 1, 1996, taking the place of Sir Slam A Lot.

Hooper debuted during the “teal period” to match the Pistons’ new equestrian emblem. However, his popularity as a mascot allowed him to stay with the team even when the Pistons returned to their original colors and basketball logo a few years later. 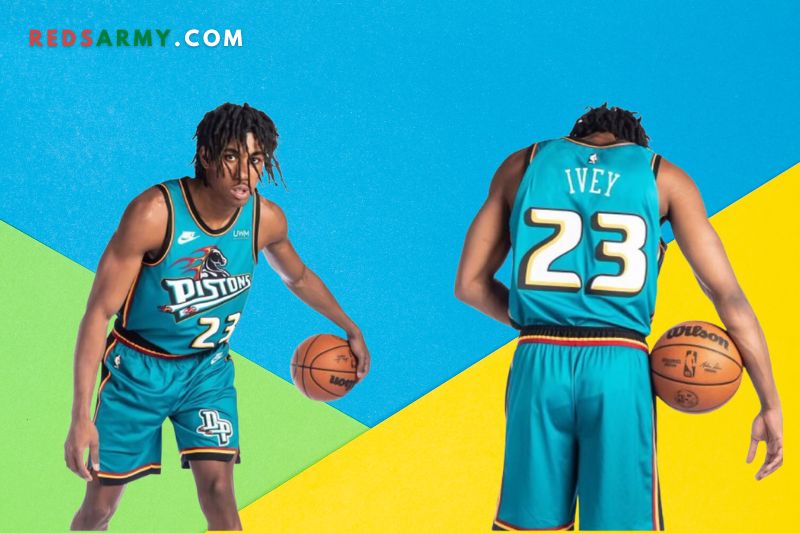 The Pistons’ jerseys stayed substantially intact for two decades after moving from Fort Wayne, Indiana, to Detroit in 1957, with the name “Pistons” in blue block letters. The squad used a uniform featuring lightning bolts on the flanks and the wordmark on the front of the jerseys during the 1978-79 season. In 1981, the team abandoned the lightning bolt concept and returned to its basic block lettering and plain side panel pattern, which it used until 1996.

The Pistons altered their colors to teal, black, yellow, and red that year and revealed a new logo featuring a horse’s head and fiery mane. This color scheme lasted until 2001 when the team reverted to the original red, white, and blue hues and a uniform design inspired by the 1981-1996 threads. The horse’s head and flame mane emblem remained in use until 2005 when the team adopted a more traditional logo style.

The Pistons debuted a new alternate jersey with navy blue and red colors on August 14, 2013. It bore the words Motor City across the front and was the club’s first alternate look since 2005 when they wore a red alternate that was essentially a recolored version of their normal road kit.

The uniform is the first of its type, created to reflect metro Detroit’s pride and spirit while respecting the region’s automotive origins. According to the team’s news release, “The jerseys were created in collaboration with Adidas and the NBA.

The Pistons introduced a new alternative pride uniform on October 4, 2015, to be used for the 2015-16 season. In a news statement, the team stated, “The concept for the Detroit Chrome jerseys originated from a desire to salute our coolest vehicles of the past and future. Detroit is often regarded as the world’s auto capital, where do the pistons play? Chrome leaves an everlasting imprint on our design vehicles.

The outfits have a matte chrome base color and clean, uncomplicated designs inspired by the famous muscle automobiles that have screamed down Woodward Avenue for decades. The navy trim and Detroit printed across the breast symbolize the blue-collar work ethic that established the car industry and area.”

The Pistons introduced a new logo on May 16, 2017, a modernized version of the old Bad Boy Pistons period design utilized from 1979 to 1996.

The Pistons announced in July 2022 that they would reintroduce the teal uniform as a throwback for the 2022-23 season.

Origins of the Bad Boys nickname 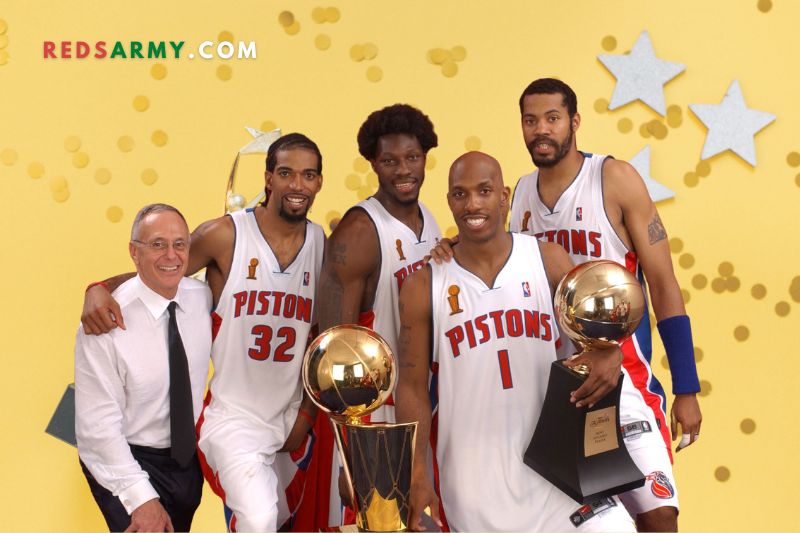 Al Davis, the owner of the then-Los Angeles Raiders, donated Raiders apparel to the Pistons before the opening of the 1987-88 season to commemorate the common vision of the clubs and their tough style of play. Pistons Vice President of Marketing Dan Hauser stated, “When we faced Golden State in Oakland, Al had Raiders warm-ups with our names and numbers on them. The Raiders’ brutal bad-boy combat style complements our brand. That’s why there’s a sea of black during our home games at the Palace: black hats, T-shirts, and sweatshirts “.

READ ALSO  Difference Of Magic Johnson Vs Michael Jordan: Who Is Better 2022

Because of these characteristics, the players and fans accepted the moniker and image. “You can’t be great in this league and have no identity,” said Pistons guard Joe Dumars. Later, Hudson Soft would develop and distribute Bill Laimbeer’s Combat Basketball, a future Super Nintendo Entertainment System basketball game that allowed guns and no regulations.

Michael Jordan stated that his favorable opinion of the squad was not universal. “The Awful Boys are bad for basketball,” he said later, adding, “I despised them.” That hatred endures to this day.” “If I had everything to do over again,” NBA Commissioner David Stern remarked at the time, “we would be more active in policing, shall we say, that style of play since it led to our NBA Pistons game becoming much more violent.” 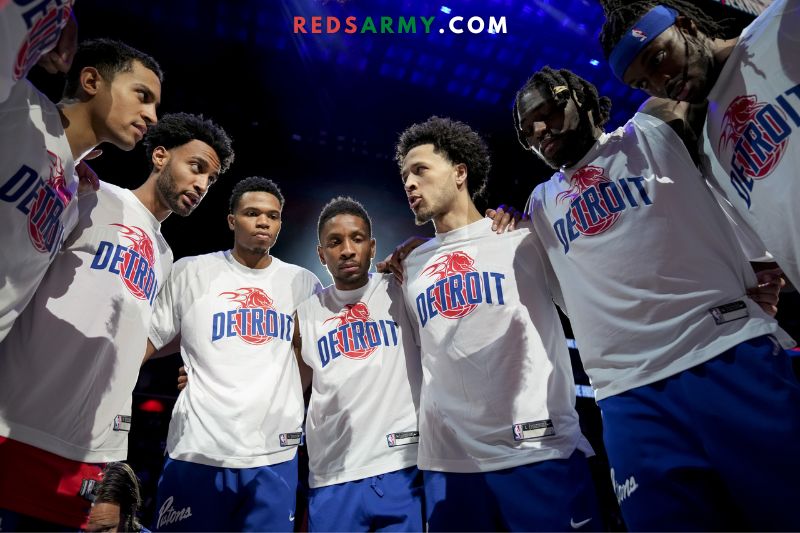 As a child growing up in Detroit, Jalen Rose, who later played as a part of the Fab Five at Michigan, admired the Bad Boys brand, noting, “Everything about the Bad Boys appealed to me. I liked how they played and how they did not give up. They went out and kicked the buttocks of the other teams.”

According to Pistons announcer George Blaha, “I believe the people of Detroit and Michigan liked the Pistons’ never-say-die attitude. Detroit is a working-class community, and the same fan can be found throughout Michigan, from the large cities to the tiny communities. There isn’t a day that someone I talk to doesn’t bring up the Bad Boys team; they adore them.”

You can find out about other NBA Teams here:

What are the Detroit Pistons known for?

The Detroit Pistons championships have three NBA titles and several Hall of Fame players on their roster. They battled for three decades until winning back-to-back titles in 1989 and 1990. After a period of rebuilding, they were able to field another championship squad in 2004.

Why is Detroit called the Pistons?

The Detroit Pistons retired numbers team was founded in 1937 in Fort Wayne, Indiana. Under the direction of founding owner Fred Zollner, the team competed in the National Basketball League. Because Zollner’s company made pistons for autos, he christened his squad the Fort Wayne Pistons.

Why do the Pistons have a horse?

Hooper is the mascot of the Detroit Pistons of the National Basketball Association. He usually appears as a horse dressed in a Pistons jersey. The meaning is that, like the pistons after which they are called, the team creates horsepower, therefore the equine mascot.

Why did the pistons change their logo?

On Tuesday, the Detroit Pistons revealed a new logo, the first modification to the team’s primary symbol since 2005. The logo deviates from the team’s previous text-over-red-basketball approach by considerably lowering the font size and changing the ball’s appearance.

The Detroit Pistons are a Detroit basketball team that plays in the NBA. The team is based in Detroit, Michigan, and was founded in 1941. The Pistons have won three NBA championships (1989, 1990, and 2004) and have been to the NBA Finals six times.

Tom Gores is on the team, and it’s head coach is Stan Van Gundy. The Pistons play their home games at the Little Caesars Arena. Thanks for reading this article.