In the history of the NBA, there have been few players as dominant as Bill Russell and Wilt Chamberlain. These two giants of the game went head-to-head in some of the most iconic battles in NBA history. Who was the better player? Let’s take a look at the numbers. 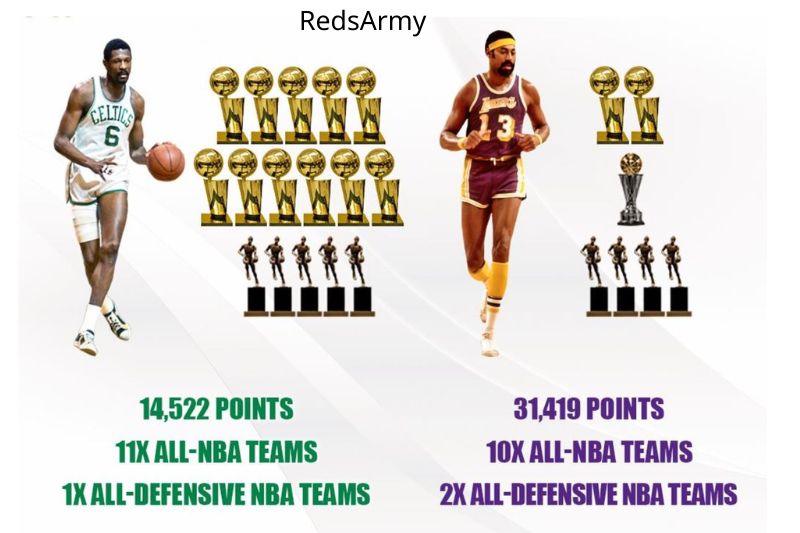 Wilt was a scoring machine, capable of easily scoring 60 points or more, while Russell was a rebounding monster.

The Philadelphia-born player, who owns the record for most points scored (100) and rebounds in a single game (50), may be the greatest statistical phenomenon in NBA history. According to reports, Bill Russell has also won 11 NBA titles and is often regarded as the greatest team sports winner. 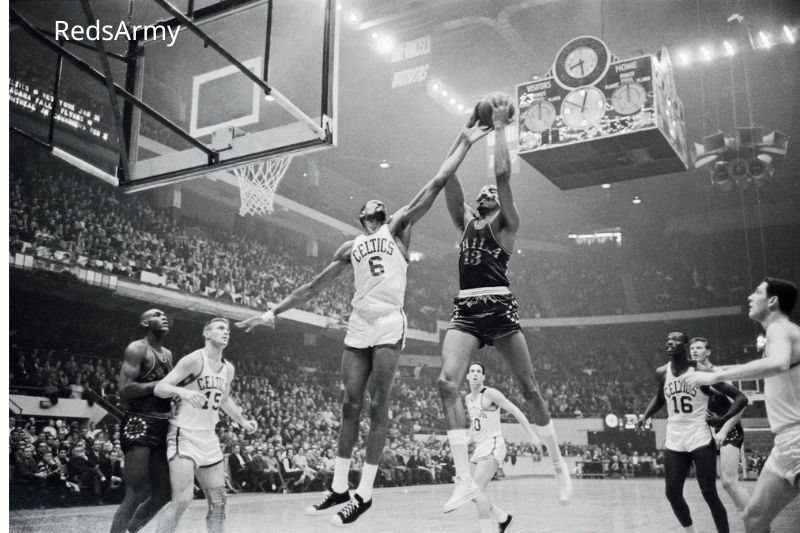 Russell was the dependable center of the Boston Celtics dynasty, while his opponent was the athletically brilliant but unpredictable giant. Pundits go beyond these preconceived beliefs, outlining how the two altered how spectators and players interacted with and interpreted the game.

In 49 postseason games versus Wilt Chamberlain, he averaged 24.7 rebounds, 14.9 points, and 4.9 assists. However, while playing Russell in all games, Chamberlain averaged 29.9 points and 28.1 rebounds per game.

READ ALSO  How much is an NBA championship ring worth?

In comparison, the former Celtics captain averaged only 14.2 points and 22.9 rebounds per game versus his opponent. He did, however, do well in the playoffs, whereas Wilt shined during the regular season.

In comparison, the former Celtics captain averaged only 14.2 points and 22.9 rebounds per game versus his opponent. He did, however, do well in the playoffs, whereas Wilt shined during the regular season.

But the only figure that mattered to him was the amount of championship rings he possessed, which he had more than his Philadelphia opponent. Chamberlain had his pick of points and rebounds. Bill just cared about championships, and he has more of them than any other player in NBA history.

Fans of the time and still love watching and discussing the two’s friendly rivalry, which is still recognized as one of the best in professional basketball history.

The Chamberlain-Russell rivalry received the same level of scrutiny as the Larry Bird-Magic Johnson rivalry. Before Bird vs. Magic in the early 1980s, the NBA had few big individual rivalries.

Russell would drive to Philadelphia the night before a Thanksgiving game to stay at Wilt’s house. Chamberlain stated that he had done so six years in a row. In 1997, he stated:

“He’d drive by my house on Thanksgiving, eat my meal, sleep in my bed, and then whip me the next day. ‘Now, Wilt, we shouldn’t feed Bill so nicely the next time,’ my mother would remark.”

Off the court, the two centers had a financial competition. When Chamberlain signed to a three-year, $100,000 agreement with the 76ers in 1965, Russell promised to resign unless the Boston Celtics offered him $1 more than his competitor. He eventually accepted the deal and became the highest-paid player in the NBA with a new contract of $100,001. 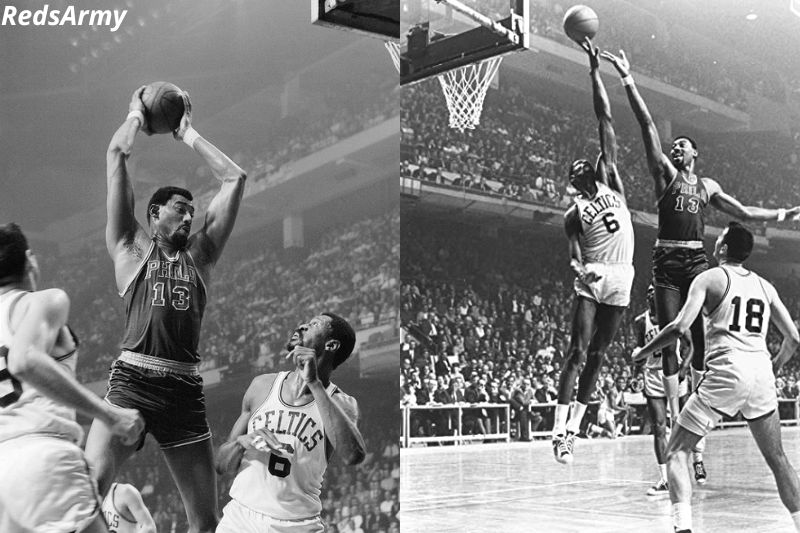 Bill Russell and Wilt Chamberlain are two of the most dominant players in NBA history. They both revolutionized the game with their unique abilities. When they went head-to-head, it was always must-see TV. Here’s a look at their head-to-head matchup.

Who Is The Greatest Center Of All Time? 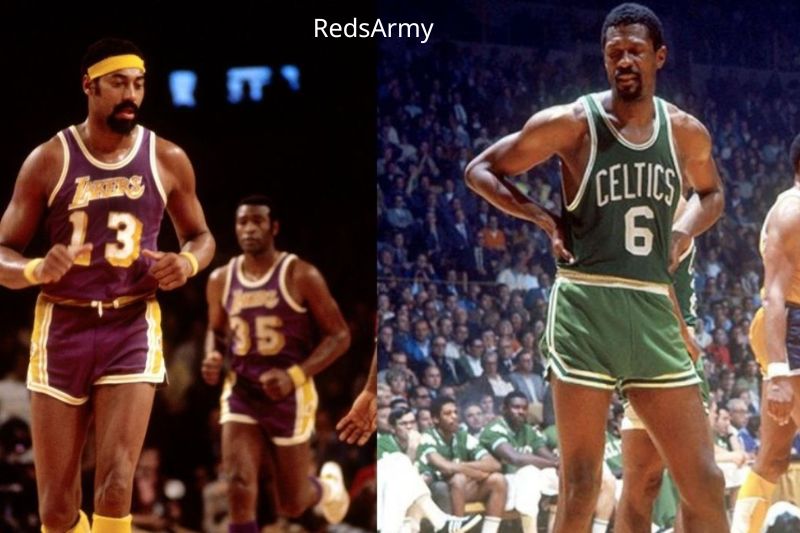 The greatest rivalry in sports history.

Both Russell and Chamberlain have a plethora of reasons to argue for the finest center of all time, with Chamberlain arguing for best player.

Wilt or Russell are both excellent choices.

Wilt was the larger, stronger, and faster of the two. But a vastly superior and far more extended attacking game. Without a doubt, the most dominant offensive player to ever play the game.

Russell was recognized as a defensive stopper and rebounding machine. He blocked shots with the best of them, and unlike Wilt and many others, he was able to keep the ball in play and not waste possessions.

He was a rebounding magnet who was usually in terrific position near the basket when a shot was attempted.

The parallel here is that both are rebounding like crazy guys.

Russell does not have as many honors as Wilt, but he does have 11 rings.

Russell had a team-first attitude.

Whereas Russell always appeared to come out on top.

Do you see what I mean?

You can’t go wrong with any of these players.

If you want to be a scoring machine and an unstoppable force down low, you must be prepared to give him the ball all the time. Then Wilt is your man.

READ ALSO  How many rings does Kevin Durant have?

If you want a team player that doesn’t care about numbers and will do everything it takes to win the game. Russell is absolutely your man. 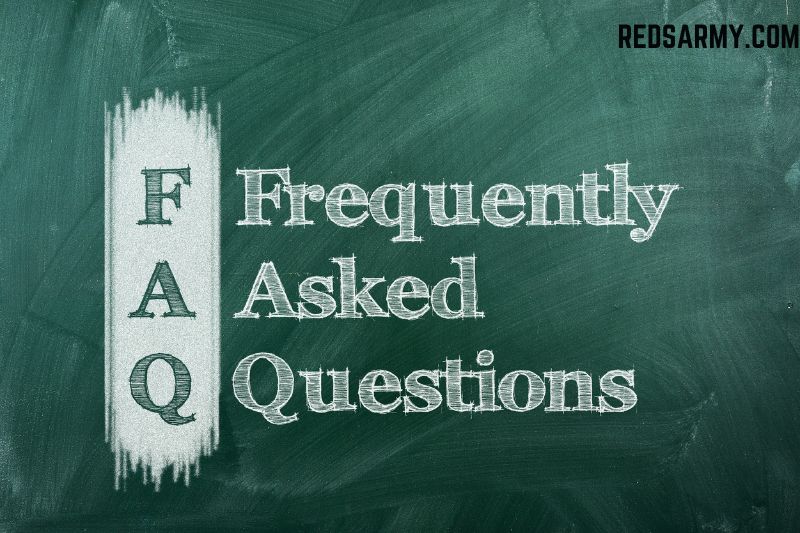 1. How many times did Wilt Chamberlain and Bill Russell meet in the finals?

2. How many points did Wilt average against Bill Russell?

3. Why Russell was better than Wilt?

Russell didn’t care for glory or for records; he lived to crush his opponent and to win. Period. On the other hand, Wilt was obsessed with statistical superiority, which he certainly achieved. He averaged 50.4 points per game in the 1961-62 season, a number that no one has even come close to matching since

In conclusion, both Bill Russell and Wilt Chamberlain were two of the greatest basketball players to ever play the game. They both had their own unique skills and abilities that made them stand out from the rest of the players. Even though Chamberlain may have had the better statistical career, Russell’s impact on the game was far greater. He was a defensive genius and changed the way the game was played. He also was a part of one of the most successful dynasties in sports history, the Boston Celtics.